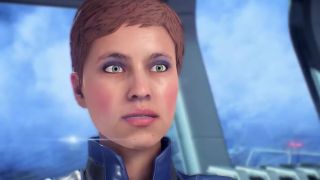 Mass Effect: Andromeda's animation has been getting plenty of attention since the game arrived early for members of EA Access, and not for the best reasons.

Lead designer, Ian Frazier, has been bravely answering questions on a few Mass Effect: Andromeda issues, and the animation was one of those things addressed.

@JohnCharling At day 1? No, that ship has sailed. We'll have more patches later on, but exactly what goes into them is still in discussion.March 16, 2017

Frazier answered this and many other questions after confirming the day one patch for the game had been included in the EA Access version, which is what everyone's currently playing.

Hey folks, the live support team just confirmed for me: the day 1 patch IS included in the early access build on both Xbox and PC. pic.twitter.com/1OnlHV1osXMarch 16, 2017

Some of the questions have been quite specific, like if Peebee's 'backwards gun' bug will be fixed:

Something tells me stuff like this is not what BioWare and EA were hoping people would be focusing on as Mass Effect nears release. pic.twitter.com/sQkEMmI2iuMarch 16, 2017

Basically, the game as it's currently appearing is what people will be playing on day one. There are more patches on on the way, so other things will be fixed but for the time being what you see is what you get.

Find out everything we know about Mass Effect Andromeda here, and tune back next week for our full review.