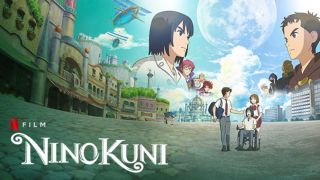 The Ni No Kuni movie is now available on Netflix US and Netflix UK. With a runtime of 106 minutes, this feature-length animated film ought to keep you spellbound for the evening.

The Ni No Kuni series has been adapted into a full-length movie, and the English dub is set to hit Netflix on January 16. Obviously you'll need a Netflix subscription to catch the movie when it releases, but anyone can check out the English-language trailer on the movie's Netflix page.

"Two average teens go on a magical quest to save the life of their friend and her counterpart from another world. But love complicates their journey."

The film was directed by Studio Ghibli animator Yoshiyuki Momose, who worked on both Ni No Kuni games as well as Ghibli staples Spirited Away and Grave of the Fireflies.

Both Ni No Kuni: Wrath of the White Witch and Ni No Kuni 2: Revenant Kingdom are incredibly cinematic, story-driven adventures with Ghibli 's signature art design and storytelling style written all over them (Studio Ghibli was directly involved with the former). In fact, if you strung together every cutscene across both games, you'd probably have enough for two movies. It's no surprise then that the series has spawned a feature-length movie.

It sounds like the Ni No Kuni Netflix movie will tell a completely different tale from the two Ni No Kuni games, which each involve plots completely separate from each other. That said, the plot sounds directly inspired by the first game, which also involves "counterparts" of characters existing in separate worlds.

Ni No Kuni and Ni No Kuni 2 are two of the best anime-inspired games we could find.