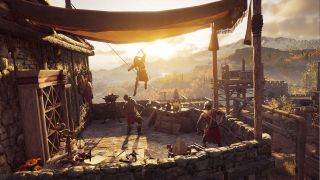 Assassin's Creed Ragnarok, the much rumoured next entry in Ubisoft's open world alt-history series, is looking all the more likely, as an exhaustively detailed leak has surfaced online following multiple sightings of store listings for the game across a number of retailers.

The latest leak, provided by an anonymous tipster citing connections with the game's development team and summarised on Reddit here, claims that Assassin's Creed: Ragnarok does indeed place you in the water-logged boots of a Viking, and will release next September with an official reveal apparently coinciding hand-in-hand with the rumoured PlayStation meeting for PS5, said to be taking place in February.

Not only that, but the post claims that players will once again be able to choose their gender for Ragnarok's main protagonist, named Jora, who leads a small band of fellow Vikings that allow for drop-in/drop-out online co-op with up to four different players.

Other notable points made by the rumour state that the game's map is essentially all of Northern Europe (including cities such as York, Paris, and London), that dynamic, large scale wars will take place in real time across the open world, that stealth has been radically overhauled, and that the game will be a cross-gen release for PC, Xbox One, Xbox Series X, PS4, and PS5.

Normally, these kinds of anonymous tips have to be taken with as much salt as medically recommended, but - without potentially spoiling any major story beats - this leak goes into exceptional detail, referencing relatively obscure historical events that do indeed have connection with the associated time period. It's hard to believe that anyone would put this amount of time and thought into a complete fabrication.

Even so, we'll have to hold out hope for some more official from Ubisoft itself before anything can be verified but, according to this latest goss, that wait won't be for much longer...

Check out all the other new games of 2020 on the way, or watch the video below for our latest episode of Dialogue Options.