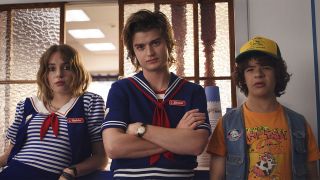 Entertainment and streaming juggernaut Netflix is coming to E3 with a panel titled 'Bringing Your Favorite Shows to Life: Developing Netflix Originals into Video Games'. It'll be part of the E3 Coliseum program that runs throughout the show in a theater close to the LA Convention Center.

In a rehearsed conversation between the E3 and NX Twitter accounts, Netflix confirmed that it would be showing off the upcoming Stranger Things game. The company also tweeted about their being "more to come".We don't know much about what's to come, outside the panel being about some of their original shows. Maybe we'll finally see the Nintendo Switch Netflix app come to life.

Netflix announced Stranger Things: The Game for PC, PS4, Xbox One, mobile and Nintendo Switch back in December. It's scheduled to launch on July 4.

Heard the latest #E3Coliseum excitement? Come hear from the team at @NXOnNetflix for their panel at #E32019 - information here: https://t.co/6ohRvpa2Am pic.twitter.com/cSFpq9iyrSMay 13, 2019

It's funny to think that while huge studios like Sony and Nintendo won't have a major presentation at the show this year, Netflix will be making their E3 debut. The streaming giant will hopefully expand on their plans to "double down" on more interactive storytelling after the success of Bandersnatch. There are even rumors floating around that the Telltale Stranger Things game could be shown off despite the studios closure.

Netflix put out a statement that said they'd still work to finish the game back in September of last year. "We are in the process of evaluating other options for bringing the Stranger Things universe to life in an interactive medium."

Netflix has wanted to expand its game offerings for sometime now, E3 could be the perfect place to announce more info around what they have planned.