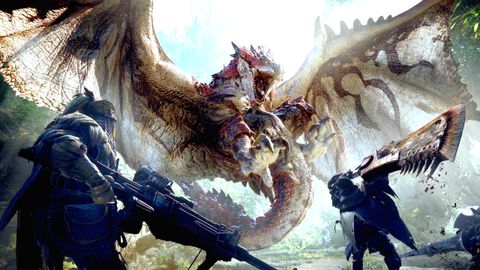 A triumph for the series and one of this generation's greatest games yet. Monster Hunter World takes the beating heart of a vital, niche franchise and elevates it toward universal appeal.

Parsing the difference between love and infatuation is a tricky business. There’s a potent cocktail of hormones and pheromones to contend with, intoxicating new emotions warring with old, cautionary memories. But sometimes there’s a transcendent moment when you just know it’s true love - a glance across a crowded dinner party, a lingering kiss, heavy with portent, or, in the case of my affair with Monster Hunter World, a massive chicken monster’s yellowed beak suckling raw egg out of a giant dinosaur shell.

That may not sound like the height of passion, but it was the moment that pushed me from uncertain affection to full blown obsession with Capcom’s latest giant-monster-battling romp. You see, I spent a lot of my early time with Monster Hunter World as a sort of novice zoologist, stealthily stalking my prey and observing them in their natural habitat. It’s something the game enables (encourages, even) with its lush, dynamic, beautifully rendered environments. Gone are the segmented maps of Monster Hunter’s past, replaced by sprawling, seamless regions replete with prehistoric fantasy flora and fauna. This is a world that beckons you, invites you to get lost in it, and masterfully conceals its clockwork mechanisms under a thick layer of vibrant verisimilitude. Monster Hunter has always had an appealing, unique art style, but World pushes it to new levels, aided in part by the power of the current generation of consoles but also by its deft stylistic choices. Each area feels bespoke and fantastical, from the primordial Ancient Forest to the mysterious, enchanted Coral Highlands, to the gloomy, toxin shrouded unbelly of the Rotted Vale.

A world as hypnotising as its monsters

And so I’m hypnotized by the ecology of the Ancient Forest, the first region World deposits you into after its table-setting intro. I’m hot on the trail of the scrawny, crested Kulu-Ya-Ku, down the winding paths of its desert habitat and into the lair of a native herbivore. In my previous attempts to track it, I’d discovered Kulu-Ya-Ku’s three-toed footprints and other signs of its passing — including shell fragments. It’s part of World’s new scoutflies mechanic, one of the many ways Capcom has tried (and largely succeeded) at making the latest entry more accessible to newcomers – although there's no shame in confusion, and our Monster Hunter World tips might prove a useful head start.

Scoutflies act as diegetic waypoints, and they become more useful and precise the more evidence of a monster’s movements you discover. Eventually, they’ll provide you with clear information about a monster’s location and the best route to them, obviating the old system where hunters would roam a region at random looking for their prey and then go through the onerous process of marking them with paintballs to follow their movement. Like a number of quality of life improvements that World introduces, scoutflies eliminate some of the irritation and busy work previously associated with the series’ hunts without dumbing down or oversimplifying the core elements that veterans cherish.

Only after patiently tracking Kulu-Ya-Ku, however, do I get a real sense of how integrated the scoutfly mechanic is into the game’s ecologies. After the lanky beast purloins a fresh herbivore egg and is about to smack it open, it catches sight of me creeping around the periphery of the lair and startles. Every monster has different behaviors that dictate their routines and reactions, and many of them will attack a hunter on sight, but Kulu-Ya-Ku is more intent on escaping with its protein prize, so it scurries past me and back out into the scorching desert heat. When I hunt it down later, after a brief chase up some ledges (which can now be more quickly traversed thanks to the slinger, an arm mounted device that fires rocks and other ammunition but is also fitted with a grappling hook) and across a shattered ravine, I find it snoot-deep in that same precious egg, eagerly slurping up unborn dino. When its had its fill and moves on, the discarded egg lays where it falls, a new piece of a dynamic, living ecology and an element to discover and track with scoutflies.

It’s World’s brilliant world-building distilled down into a powerful, singular (even romantic) moment. The creatures in World aren’t just static boss fights waiting for you to appear and trigger them. They move around the world, interacting with smaller insects and animals, battling one another for territory and domination, hunting for prey or sleeping. And the world changes and shifts to reflect their passage — a monster scratches its head and the feathers that flutter down become your research fodder, or claws at the ground to sharpen its claws, leaving gouges you can feed as data to your scoutflies. This in turn helps researchers back at your hub (which in World is a complex of old sailing vessels that have been cobbled together into a tiered, makeshift village) build a database of information about the monsters you track, which makes locating them in later encounters easier.

All too easy to be zoologist first and hunter second

Eventually, though, the love affair must end - it’s time to hunt. It’s here that Monster Hunter World will be most familiar to those who, like myself, have sunk hundreds or thousands of hours into previous Monster Hunter titles. While the combat feels a bit snappier and more reactive than other games in the series, particularly the ranged weapons, which make Monster Hunter feel closer to a proper third person shooter than ever before, it’s still very much the strategic, methodical combat that’s long been a hallmark of the franchise. I tuck and roll around Kulu-Ya-Ku’s vicious beak and flailing claw attacks, carefully searching for openings to pound it with my massive, stone-headed hammer, the occasional devastating strike shattering a critical part of its anatomy and sending precious crafting materials flying off. Targeting those vulnerable, breakable bits of your foes is made easier by the introduction of damage numbers, which change color depending on whether you’re striking a weak spot, and generally give you a much better indication of how effective your attacks are than in any previous iteration.

6 things I wish I knew before playing Monster Hunter World

That central loop is very much still present, and as satisfying and deep as ever. Hunt monsters, slay or capture them for the components your smiths need to craft new and better weapons and armor, to hunt bigger and nastier beasts, to craft even more deadly implements and thicker protection. Wash, rinse, repeat. While there is a certain, repetitive groove that it's possible to fall into (and just as much grinding for rare materials as have been present in previous games), Monster Hunter World does an excellent job of breaking up the hunts with a smattering of important story moments, side activities, and clever diversions. And these diversions, as well as the critical story moments and the introduction of new mechanics or systems, are paced extremely well, another way that World strives to welcome newcomers to the complexities of the series without sacrificing depth.

If anything, in fact, there is more depth than ever before. Alongside the various items you craft from the materials you harvest in the world or from monsters (things like healing potions, food to increase your stamina, or traps to immobilize monsters), there are new specialized tools that add more gameplay options both during and outside of combat. Things like the ghillie suit that let you temporarily vanish while you sharpen your weapons or heal up, or the cleansing station that lets you purge yourself and your party of nasty status effects like bleeding and poison. Then there are the new environmental traps you can unleash mid-fight, to dump heavy boulders on an unsuspecting monster’s head or trap it in a net of vines while you wail away. Instead of the system in previous games, where you’d need to wear multiple pieces of the same armor set to unleash bonuses to things like attack or sharpening speed, now every piece of armor imparts some kind of added bonus, allowing hunters to mix and match in ways that were previously inadvisable. And there’s the aforementioned slinger, which means even melee hunters always have some kind of ranged attack available, with collectible ammo ranging from explosive and fiery to piercing and shattering.

Monster Hunter World is an incredible achievement. It manages the nearly impossible feat of taking a franchise known (and in many corners beloved) for it’s incredible complexity and depth and making it significantly more approachable, without in any way stripping it down or diminishing it. It tells the most compelling, kinetic story in any Monster Hunter yet (not a tremendous feat, admittedly, but this is a worthy and interesting story) and offers some of the most interesting and addictive action combat in any franchise, bar none. If for some reason you know the core Monster Hunter gameplay doesn’t appeal to you, Monster Hunter World probably won’t change your mind. For everyone else, and particularly for anyone who’s been intrigued in the past but felt intimidated by Monster Hunter’s reputation for opaqueness: buy this game… and give love a chance.

A triumph for the series and one of this generation's greatest games yet. Monster Hunter World takes the beating heart of a vital, niche franchise and elevates it toward universal appeal.