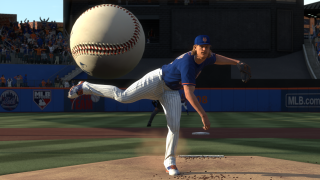 PlayStation’s greatest baseball game is back, and set for another season of monster home runs and blink-and-you’ll-miss-‘em strikeouts. GamesRadar+’s review will be live early next week once I’ve had chance to digest all of MLB The Show 17’s major modes. In the meantime, here’s some critical information for anyone looking to immediately get started on a career or Diamond Dynasty: the top players in this year’s game, ranked by position.

A big drop-off from San Fransisco’s Posey to the rest of the pack, which means he’ll be a bank-breaker in Diamond Dynasty. It's worth noting that Yankees catcher Gary Sanchez narrowly misses out on a top five spot, but shares the 84 overall rating of Perez, Molina and Ramos.

Votto vs Goldschmidt is essentially a coin flip this year, with Votto’s all-round offense rated higher, but Pauly offering Gold-standard defensive skills. Meaning 98 per cent of players will prefer the Cincinnati slugger. As a collective all have slipped slightly ratings-wise from MLB 16, where Cabrera and Goldschmidt both scored 96, and Votto 94.

Altuve is rewarded for his 24-homer, 96-RBI 2016 season with an incredible 97 rating, and is the second best offensive player in the game after Angels outfielder Mike Trout. There’s an almighty fall for Dee Gordon, however. After ranking second last year the Dodgers speedster falls out of the top five completely with an overall decrease from 90 to 84.

An abundance of riches to choose from at the final stop before home plate, with power across the board – Donaldson scores 93 for that attribute against left handers, for instance. Toronto's talisman also topped the third-base pile in MLB The Show 16, boasting an overall rating of 96.

No spot at all this year for Troy Tulowitski, after ranking first last year with an overall rating of 93. Instead, he’s downgraded ten attribute points, to 83. It’s not a position packed with elite talent, but if the above don’t tempt you then Carlos Correa (Astros) or Jonathan Villar (Brewers), both also rated 85, might.

It’s worth remembering that The Show splits outfielders by field position, so while Cespedes only ranks fourth here, he’s still the best left-fielder in the game. Narrowly missing out on this fantastic five are Miami deep man GIancarlo Stanton (88), Brewers all-rounder Ryan Braun (87), and Pirates center-fielder Starling Marte (87).

All of the above aside from Miller are initially designated as closers, but you can switch them to relievers in career mode should you see fit. (Though some might consider you unfit for doing so.) 90-rated Dellin Betances (Yankees) and new San Fran finisher Mark Melancon (89) are also worth a spot on your radar, and roster.