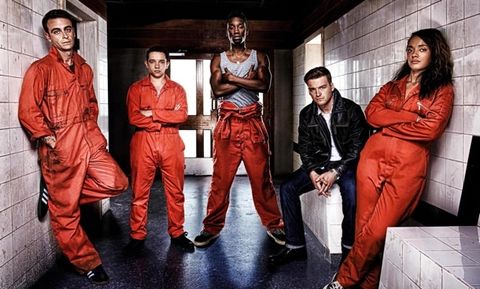 THE ONE WHERE The Thamesmead terrors double-cross each other for a briefcase full of money, we meet the latest members of the gang and some guy gets his bellend cut off. Ouch.

VERDICT Given the unenviable hand the creators of Misfits were dealt this year – the loss of half the main cast – it’s impressive that this series four opener is quite so much carefree fun. Rather than dwell on the absences, or even play it safe with an episode dedicated to introducing new characters Jess and Finn, they’re simply swept along by the madness. It’s an episode that does the unexpected, which is exactly what you would expect from this show.

It’s effectively a twisty-turny, Tarantino-esque heist movie on an E4 budget, but with more cock jokes. As Rudy puts it, the episode has, “New powers, a hint of... sexual possibilities, tears, laughter, horribly graphic violence... oh, mate, mutilated testicles! Something for all the family.” Despite this it feels small. Too small. Particularly as it highlights the sense that the gang exist in their own little bubble outside of any external influence to a greater degree than ever before (why isn’t the probation worker there in the morning anyway? And are the police ever going to investigate all these people that keep disappearing?) It gets away with its limited scale because of its unconventional structure, storytelling trickery and relentless pace.

It goes to some very dark places. For the most part it actively encourages us to dislike, or at least be put off by, these characters. Seth horribly mutilates a man, Curtis gets caught having a cheeky wank, Rudy is totally untrustworthy, new probation worker Greg is disgustingly creepy, Finn tells some reprehensible fibs and Jess pees in a freezer with a man she just met. Without the blistering humour this would actually be quite a grim watch, but the darkness is always present, culminating in the episode’s final few moments where we find out Finn’s dark secret – he has a mystery girl tied up in his bedroom.

Newbies Finn and Jess have their moments to shine, but we never really get a sense of how they will fit into the new gang or even who they are. Jess more so than Finn. Aside from being a bit prickly she remains a mystery by the end of the episode. Finn we get a better handle on. He’s a little bit like a cowardly, scouse version of Heath Ledger’s Joker, constantly telling tall tales about his past, but whatever we learn is coloured by the reveal at the end of the episode. Unlike Rudy’s introduction in the series three premiere Jess and Finn fail to make a big impression, but that doesn’t mean it won’t happen in future episodes.

Curtis is something of a wasted presence this week, only really contributing as a familiar face to make the transition easier. Seth and Rudy get to have much more fun, particularly Rudy who is, unsurprisingly, the highlight of the episode as the most incompetent con man in the history of heist yarns. It might not be Misfits at its very best, but at least when Rudy’s on screen you’re never far away from a laugh.

IRL Seth explains that Kelly won’t be returning because she’s defusing mines in Africa (presumably she’s finished community service then?) In real life it was announced actress Lauren Socha wouldn’t be returning shortly after she pleaded guilty to assault , though the decision was apparently made before the outcome of the case.

BEHIND THE SCENES You may have seen Karla Crome (Jess) most recently in BBC 2’s Murder , or Chloë Sevigny transgender assassin series Hit & Miss . Nathan McMullen recently told SFX that he was offered a role for series three, but asked to forfeit the part for a chance to come back as a bigger character in series four, which turned out to be one of the leads!

FAB FX Rudy sawing Michael’s hand off (while whistling “It’s A Long Way To Tipperary”) is a delightfully gruesome piece of prosthetics work.

CHARACTER In one, utterly terrifying, speech we learn everything we need to learn about new probation worker Greg. Unlike previous probation workers we don’t think this one’s going to be as much of a pushover.

GIRL TROUBLE With just one girl left in the gang (a quite tomboyish girl at that), Misfits is at risk of becoming a bit of a sausage fest. Where the ladies at?

FEATURED MUSIC “ Joker And The Thief ” by Wolfmother, “ Paranoid ” by Black Sabbath and “ Good Intent ” by Kimbra all feature this week

CORNETTO WATCH Just short of eight minutes in Rudy grabs a Cornetto from the freezer Curtis is trapped in.

THE POWER HOUR Three new powers this week: Jess has X-ray vision (which turns her eyes a lovely alien blue), Finn has shit telekenesis and the unfortunate briefcase bearer Michael is an empath who can drive anyone to obsession with a single touch.

LMAO Oh, Rudy, how we’ve missed you. There’s so much to admire about Joe Gilgun’s performance this week, but we were particularly fond of the pseudo-posh persona he adopts while pretending to be the probation worker, “For I have been spinning you a yarn!”

BEST LINE FROM SOMEBODY ELSE
Finn : [On seeing the chainsaw lying on Rudy’s desk] “That’s a definite ball-tightening moment.”

Misfits series 4 airs in the UK on E4, Sundays at 10pm

• Read a preview of our series four feature and meet the new gang
• Misfits : What Is Wrong With The Youth Of Today? Book review

Jordan Farley
Jordan is the Community Editor at SFX and Total Film. When he isn't watching movies or sci-fi shows of questionable quality he's probably shooting men in space or counting down the days till the next Zelda comes out.
See comments
Gaming deals, prizes and latest news