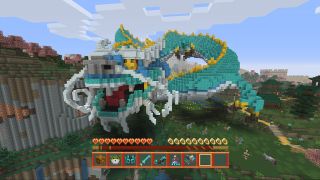 It's been a big weekend for Minecraft. Minecon 2016 has just finished in California, bringing with it a slew of blocky news. There's an official Minecraft novel called The Island coming from World War Z author Max Brooks (yes, really), Oculus Touch is on the way to Minecraft and the console edition is getting a massive new free update that adds bears, banners and, err, beetroot. The free update will arrive on Xbox and US Wii U owners on October 4 and PlayStation on October 5 and will include 7 new block types and polar bears wandering the Arctic biomes.

Less free but ridiculously pretty is the new Chinese Mythology Mash-Up pack which brings in beautiful architecture, cherry blossoms and, of course, dragons. It also has a new map for the Minecraft Battle Mode mini game. There's 41 new skins and 12 themed music tracks for use in your own creations and it's out also out on October 4 for $4.99. Check out how pretty it is in the trailer below.