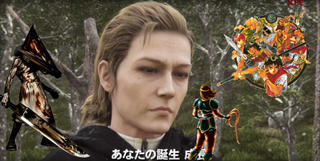 Most people who love sneaking through absurd military facilities as the perpetually grizzled Solid Snake probably weren’t expecting a new Metal Gear, at least not in 2016. When Hideo Kojima parted ways with Konami after the release of Metal Gear Solid V: The Phantom Pain in 2015, Konami tersely promised it would continue making Metal Gear games without him. Soon after Kojima announced he’d moved on to making a game for PlayStation while Konami began staffing up for “New Metal Gear.” Much to everyone’s surprise, New Metal Gear is already here and it’s a glorious, PS4/Xbox One level remake of Metal Gear Solid 3: Snake Eater’s most famous scenes.

It is also a pachinko machine.

A Metal Gear pachinko machine should hardly shock or infuriate anyone, let alone Hideo Kojima.. In fact, Kojima fully supported the Metal Gear Solid series’ identity as the grand poobah of shill series. Every time a Metal Gear came out, it was accompanied by a parade of expensive tie-in products. Get your Metal Gear watch! Get your Metal Gear shoes! But ok, lots of games offer related products like that. How about when the series flat-out advertises other goods? Metal Gear Solid 4 wants you to get an iPod! Or how about issues of Playboy? Even under the auspices of its great auteur, Metal Gear has always been used to make a buck any way possible and this new pachinko machine is no different.

That wasn’t the only beloved Konami series to get pachinkified in 2015. Mere months after Silent Hills was cancelled came the Silent Hill pachinko machine which is admittedly scary in its own special way.

It almost seems as if Konami’s rumored corporate disdain for contemporary console and PC gaming is real, based on how some of these machines have been released. At E3 2011, Konami teased the return of its old school Contra shooters with this trailer.

No Contra for PlayStation 3 or Xbox 360 ever materialized. But we did finally get Neo Contra Samurai Supreme in 2015.

That was a pachinko machine and a follow up to one of the series’ least popular entries, the bizarre PlayStation 2 spinoff Neo Contra.

Whether we like it or not, this is where Konami series live now. Suikoden, Metal Gear, Castlevania, Contra and others in the Konami archive are available on some digital services like Wii U’s Virtual Console and PlayStation Network, but they’re by no means ubiquitous. Get them while you can. Or you could always take up pachinko.