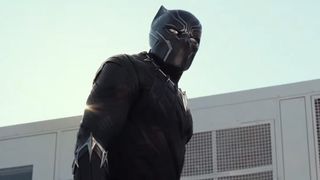 Before the mind-blowing Infinity War teaser trailer very nearly blew the roof off Hall H at this year’s SDCC, Marvel treated the capacity crowd to another exclusive glimpse of an upcoming film – Black Panther. The House of M brought both footage and a new trailer that, sadly, won’t be released online anytime soon, despite being greeted with rapturous applause. I was one of the lucky few (thousand) in the audience. Here’s what I saw.

Spidey sense, badass Thanos, and pretty much every Avenger: here's what happens in the Infinity War trailer

The footage starts with T’Challa (Chadwick Boseman), Okoye (Danai Gurira), and Nakia (Lupita Nyong’o) strutting through a metal detector in their Sunday best and emerging into an underground casino. By the looks of things the buy in at this place is more than a few quid. As T’Challa watches over the den of iniquity, he catches sight of Martin Freeman’s Everett K. Ross – the government suit you may remember from Captain America: Civil War. Ross is here to meet Andy Serkis’s Ulysees Klaw, the vibranium smuggler who had his arm lopped off by Ultron. “That is quite the entourage, you got a mixtape coming out?” Ross says, making light of Klaw’s heavily armed backup. As Gollum and Bilbo continue to play nice, the purpose of their rendezvous becomes clear: Ross is there to (re)acquire vibranium from Klaw. “Got the diamonds?” the smuggler says. After Ross notices Klaw’s fancy new prosthetic arm, he hands over a suitcase full of stones (18 pounds worth, to be precise), prompting Klaw to unzip his trousers, reach in and pull out… a chunk of Wakanda’s precious metal wrapped in brown paper with the word “fragile” scrawled on it. Nasty.

All the while Okoye and Nakia are monitoring the situation, Mission: Impossible-style. “Way too many guards in here, it’s now or never,” says Okoye. But she’s spotted by one of the guards. Her cover blown, things turn violent. In the blink of an eye Okoye extends a staff in her hand and knocks the guard over the railing, her wig falling off in the process. Klaw, noticing the commotion, draws his gun and takes aim at Ross, who shields himself from fire with the bullet proof suitcase. Seizing the moment T’Challa pulls Ross to safety behind a poker table. Nakia also gets in on the action, incapacitating a guard with a swift kick, while on the upper level Okoye continues to show exactly what she can do with that staff, swinging it overhead with balletic grace.

Attempting to make an escape Klaw starts howling like a wild dog, shooting into the panicked crowd as T’Challa gives chase. Klaw runs upstairs, but T’Challa heads him off, using his superhuman strength and agility to jump 10ft in the air to the level above and corner his quarry. Klaw pulls the trigger, but he’s out of bullets. “You know, you look just like your old man,” Klaw says, distracting T’Challa just long enough to transform his artificial arm into some kind of energy weapon. As he takes aim, the King of Wakanda grabs a nearby trolley and uses it for cover, but before we see if he makes it out unscathed the footage cuts to… a new trailer!

Despite featuring plenty of fresh footage, this new trailer feels more like a turbo-charged version of the film’s fantastic first teaser than anything strikingly new. Though there are a handful of moments that prove exactly why Black Panther is the MCU’s most badass film to date. In the first, T’Challa’s costume materialises around him in mid-air in a similar way to Iron Man’s briefcase suit, but with no obvious point of origin. Do the Wakandan’s have tech that surpasses even Tony Stark’s? In another, we see Okoye putting that staff to good use again, tossing it like a javelin into the ground in front of a car and causing it to crash. And in the third, a suited up T’Challa folds his arms and drops out of a plane in a way that make Cap’s parachute-less plummets look amateurish. The trailer ends with Michael B. Jordan’s villainous Erik Killmonger, “Must feel good, sitting here comfortable,” he says. T’Challa replies. “What do you want?” The pair start to fight, tumbling down a large hole, but as they fall Killmonger reveals the ace up his sleeve: his own gold-tinged Black Panther suit that materialises around him, the pair swiping at each other as they fall. Needless to say, Black Panther is looking unmissable.