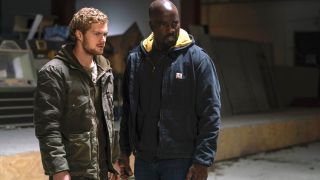 There’s a moment in Luke Cage season 2 that is cringe-worthy levels of manufactured. It’s during the traditional late-season sag of Marvel’s Netflix shows where, ten episodes into what should have been eight episode romp, our hero of Harlem is down on his luck (again), after the bad guy got away (again), and he’s contemplating his next steps (again).

Then, as if by incredibly convenient magic, Danny Rand himself walks into Pop’s Barbershop, eager to team up and help out his friend in true, comic book fashion. It’s the sort of thing you’d expect from a pantomime show, where a character enters from stage right just in time to say “Who? Me?!” in response to a joke made at their expense, where you can practically hear the writer’s pen scribbling lazily behind the scenes.

Read more: Aquaman review: "A step in the right direction for the DCEU"

Equally, Iron Fist’s entrance into the world of Luke Cage lacks any sort of organic flow, as if the character is showing up just as a way for Marvel to remind everyone that, yes, The Defenders was definitely a thing that happened, despite what anyone says. The funny thing, though, is that this false start is the only bad scene in an otherwise superb crossover episode, one which somehow manages to make Danny Rand look cooler in 45 minutes than he ever did in Iron Fist’s entire first season.

To be fair, it doesn’t take much to improve upon the character’s origin story from 2017. In an attempt to tell a subverted fish out of water narrative, the writers accidentally turned Danny into a petulant child, with all the dumbfounding naivety, discordant mopiness, and complete lack of self-awareness that follows. It wasn’t a good look for a rich, white, American billionaire, especially one who kept bringing up the mystical land of K’un-Lun like that annoying flatmate who doesn’t stop talking about their gap year to Thailand (seriously, Giles, that’s enough with the ‘dotes’).

It’s clearly been some time since then, as the Danny who shows up in Luke Cage is a happier, more laid back Iron Fist, who’s willing to laugh along with the ridiculousness of his mystical past, acknowledge his unfair privilege as part of the American elite, and is free from any of the angsty rage that so unbearably plagued him in the first seasons of Iron Fist and The Defenders. Marvel clearly saw this not just as an opportunity to cross-promote a show within a show, but rectify the character mistakes that viewers highlighted and rightly ridiculed en masse. For such a small appearance, Luke Cage’s writers have already done a pretty good job of it too.

I know it sounds like stating the obvious, but it helps that Luke Cage isn’t Iron Fist’s show, either. He doesn’t need any character arcs or inner demons to deal with here, not just because he simply doesn’t have the screen time, but because the focus is very much on Luke, and Rand - with his newly found meditative disposition - is simply there to hold up a mirror to his friend’s ongoing struggles with rage and righteous fury.

And then there’s the warehouse bust-up. Marvel’s Netflix shows have become synonymous with having at least one iconic fight scene per season, from the famous corridor scuffle of Daredevil to the… uh, famous corridor scuffle of The Defenders. Luke Cage has had some great bouts in Harlem so far, including a fan pleasing test against the limits of his unbreakable skin early on in season 2, but his tag team tussle alongside Danny is one for the books.

Starting off with another harmonious one-take shot that nods to Daredevil, and movies like The Raid and Old Boy before it, the scene is awash in thick layerings of purple, with flecks of green and yellow here and there (the colour themes for the three “surviving” Defenders, as it so happens), set to a blistering Wu-Tang Clan track. We already knew Luke was a force to be reckoned with, but the pair’s skirmish against a tide of criminals cements Danny as someone who finally knows how to land his punches, after years of the internet roasting his flamboyant ineptitude alongside Daredevil and co.

It’s an edge of your seat watch, culminating with the sort of gloriously over the top combo that you’d normally expect to see in a cheesy superhero video game. If you thought it was cool when Iron Man used Captain America’s shield as a deflective death ray in Avengers Assemble, wait till you see what Luke and Danny can do when playing “Pat-A-Cake.”

It confirms in my mind that, after a series of hits and misses, a Heroes for Hire show - based on the comic books in which Rand and Cage team up as a crime-fighting duo - could really be what Marvel needs to revitalise its Netflix portfolio. The odd couple chemistry between these two works as well on the small screen as it does on paper, with both Mike Colter and Finn Jones clearly having a blast bouncing off of each other, both literally and figuratively. Taking that spark and channelling it into a more light-hearted show set in the world of street level heroism would be a smart move, especially after so many dark and brooding seasons that once felt so fresh against Marvel’s cinematic output.

With the Defenders assembled, and Avengers 4 on the way, Marvel needs to find a way of bringing its two supergroups closer together

Netflix’s Danny Rand is still not the perfect televisual representation of Iron Fist and, for some, he never will be. Many aren’t willing to ignore Marvel’s missed opportunity to cast an Asian actor in the role, and Jones’ feathery cadence and style struggles to consistently sync up against the script he has to work with, but what we’ve seen so far in Luke Cage is absolutely an improvement.

I’m both anxious and skeptical as to whether Danny 2.0 will be able to maintain this newfound affability in his upcoming second season, where he’ll be put through the ringer once again, and the writers will naturally want to surface more character flaws and conflicts for the sake of ticking the boxes of serialised drama conventions. The question is whether they’ll be able to pull that off without making him come across as irritable and obnoxious again, or indeed if season 2 itself can avoid the pacing and tonal missteps of the first (Marvel has revealed that it will only be ten episodes long this time, which is a promising start). Nevertheless, the fact that I’m looking forward to it at all, thanks to what basically amounts to a completely forced cameo in Luke Cage, is a something of a minor miracle.