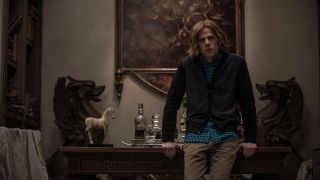 Some of the biggest headscratchers in Batman v Superman: Dawn of Justice revolve around the particulars of Lex Luthor's evil plan. Why was he so hell-bent on destroying the Man of Steel? When exactly did he learn about the heroes' real-life identities? And what was up with that rant at the end?

Many of us assumed that final warning was referring to DC's big bad, Darkseid. As it wasn't exactly crystal clear, MTV asked Jesse Eisenberg to make sense of it. “It’s a very complicated mythology that I was able to wrap my head around while we were filming," he says, "but I think there were certain editorial choices that I was not aware of that they put in retroactively.”

It'd be easy to chalk up the gaps in Luthor's logic to him simply being an unhinged individual. But as Eisenberg says, a lot of stuff was altered during post-production. According to David Brenner, the film's editor, that might be down to some of Lex's scenes getting the snip. "As always there was too much originally shot, so there were a lot of choices to make to get the film to play," he tells Pro Video Coalition. "Sometimes things don’t work out as well as they might have on the page. Sometimes they didn’t on the page either! So no matter what the budget or scale, as the editor, you’re just trying to get the story and characters to work."

Making the theatrical version 'work' meant removing some characters and extra scenes to make it a manageable two and a half hours. And even though there's a three-hour R-rated cut headed to Blu-ray, there was even MORE footage nixed from Zack Snyder's first assembly cut. "It was a lot to juggle," adds Brenner. "So what was once a nearly four hour cut with absolutely everything was ridiculous – ended up being about a three hour cut, once all these added storylines were refined with the fat was cut out."

It might sound extravagant, but a four-hour cut isn't that unusual during a film's early stages - most stuff that winds up on the cutting room floor is due to timing restraints and pacing. We'll find out which parts of Lex's plan got the chop later this year when the Batman v Superman Blu-ray hits shelves.