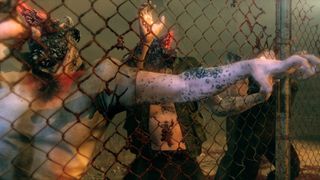 Metal Gear has gone some strange places over the years, but series creator Hideo Kojima thinks Metal Gear Survive's zombie angle is a trans-dimensional bridge too far. Kojima's currently working on Death Stranding with his newly independent studio, Kojima Productions, which is what the Tokyo Game Show panel was actually about. But when the conversation turned to the future of Metal Gear, Kojima shared some doubts about where his former employer is taking the series.

Here's some video footage of the panel, via YouTuber YongYea.

"The Metal Gear games are about political fiction and espionage," Kojima said on-stage. "Where do zombies fit in with that?"

The answer to that question is obvious, since zombies (or zombie-like entities) already do fit in at several canonical points of Metal Gear, including both Metal Gear Solid 5: The Phantom Pain and Metal Gear Solid 4: Guns of the Patriots. Remember the escape scene when all the soldiers' nanomachines go berserk? Those are totally zombies.

But both of those examples were weird little interludes, rather than the focus of their respective games. As Kojima says, Metal Gear was always grounded in political fiction when he was in charge and it doesn't look like Metal Gear Survive will have much of anything to say about nuclear deterrence or the ethics of gene therapy. Worse yet, as Kojima Productions' artist and mechanical designer Yoji Shinkawa observed, it doesn't seem to have any mecha.