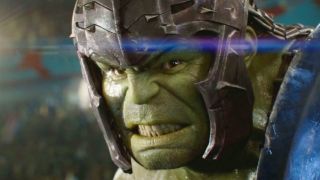 Easter eggs have been part and parcel of the MCU since, seemingly, the dawn of time. Thor: Ragnarok is no different. Except, maybe it’s a little different. President of Marvel Studios, Kevin Feige, actually took time out to reveal his favourite Easter egg from the upcoming movie and – here’s the catch – it’s in the very first second of the Thor: Ragnarok SDCC trailer.

Speaking at a press junket for the film, as reported by Screen Rant, Feige uncharacteristically opens up, prior to the movie’s release, about one of the hidden background Marvel nods.

Read more: The 30 best Marvel Easter eggs you need to know about

The shot of Sakaar’s skyline, which you can see below, is dominated not only by the gladiatorial arena on the right, but by the Grandmaster’s Palace (Jeff Goldblum doesn’t do understated, folks), which is  adorned with weird-looking faces.

It turns out these faces are important to hidden Marvel lore, as Feige explains: “There are previous Grandmaster champions that we see, as one for Hulk is being constructed, and those are all sort of Easter eggs for the deeper comic universe – that may or may never show up in the cinematic universe, but we thought it’d be fun to celebrate.”

Read more: Jeff Goldblum sings his own Jurassic Park theme song and does a dolphin impression in our Thor: Ragnarok interview

So, get flicking through your comic books and get your magnifying glasses out, because those faces will look familiar to some of you. Some suggestions have already included Beta Ray Bill, who manages to wield Mjolnir and inherit Thor’s powers in the comics, and also the God of War (not that one) Ares (no, not that one either). Greek gods in the MCU, anyone?