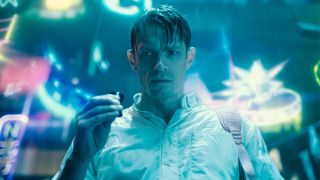 There's a lot to unpack in Altered Carbon, Netflix's sexy, noir science fiction, so you could be forgiven for missing this sly nod to everyone's favorite TV show, Game of Thrones. A Redditor has spotted a seven-pointed star in the background of a scene, and you can examine it for yourself below. It appears in episode 3, as Miss Prescott visits the police station.

Game of Thrones obsessives will recognize the symbol and its meaning. The Seven-Pointed Star is basically the bible for followers of The Faith of the Seven, the main religion of the Seven Kingdoms, and the imagery has appeared through the HBO show.

It's not the only way the two shows are connected either. Miguel Sapochnik has directed six episodes of Game of Thrones, including Battle of the Bastards, and stepped in to direct the first episode of Altered Carbon.

Redditors also speculate that the use of a tune that sounds like a version of Reverie by Debussy in episode 3 is a nod to HBO's Westworld, where the track has appeared a number of times. We tried to test this theory out but our ears aren't as young as they used to be. If you want to try and make the connection for yourself check out the scene nine minutes in when Kovacs and Elliot enter The Raven.

Spotted any other cheeky references? Let us know with a tweet.