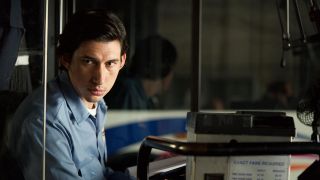 As you can’t have failed to notice, we’re at the height of awards season. The red carpets have been all but worn thin by the great and good of the industry, all hoping to fill that gap on the mantelpiece with a nice shiny statuette.

But one star who’ll likely end the season empty-handed, despite continuing his run of captivating performances in excellent films and TV shows, is Adam Driver. Since 2015, the ex-Marine has been on a hot streak, showing great range as well as aspiration, working with such esteemed directors as Martin Scorsese, Steven Soderbergh and Jim Jarmusch.

He also, of course, has become a staple of the Star Wars universe. In that time there’s been plenty of opportunities for the Academy to award him an Oscar, but to date he is yet to pick up even a nomination. Take his effortlessly charismatic performance as an alluring hipster in While We’re Young, or his profound, intense take on a doubt- ridden Jesuit priest in Silence.

Multiple critics’ organisations paved the way by awarding his understated turn in Jarmusch’s Paterson, but there was no Oscar nomination at the end of the road. And though Academy voters don’t tend to favour sci-fi, blockbusters or sci-fi blockbusters, surely his biggest role – as the hugely popular and unusually nuanced Kylo Ren – merits more recognition.

At least Driver’s not in bad company. The Academy doesn’t exactly have a flawless track record when it comes to honouring the most deserving candidates. Do you remember Art Carney’s performance in Harry and Tonto? Us neither, yet those voting at the 1974 Oscars deemed it worthier than Jack Nicholson’s in Chinatown and Al Pacino’s in The Godfather: Part II.

Among those to have never won an Oscar include Hollywood legends Cary Grant and Marilyn Monroe, as well as more recent talents Glenn Close and Harrison Ford. Meanwhile, the likes of Steve Buscemi and Scarlett Johansson are still awaiting their first nominations. Like all of the above, Driver’s career would hardly be tarnished by not winning an Oscar; but if he keeps up his current form, the Academy will need to show some recognition sharpish, or be left red-faced. Or is it just me?

Is it just me, or does anyone else miss video stores?