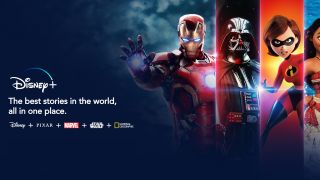 Is Disney Plus 4K and HDR? Now that the streaming service has finally arrived with its library of 600+ TV shows, documentaries, and movies, it's a question worth asking. And there's a simple answer - 'yes'. Anyone who goes for a Disney Plus sign-up will be able to watch shows at 4K resolution and take advantage of High Dynamic Range to boost the image's color by default. Although the streaming service can't yet handle 8K, that's a steal for the price nonetheless; 4K HDR is included as standard with Disney Plus for half the price of a standard, non-4K Netflix subscription. That's a damn good deal. There are no 'UltraHD' price bands here - everyone gets 4K, as long as your TV can handle it.

Is the fact that Disney Plus works in 4K and HDR worth the fuss, though? And what does it mean, anyway? It's all about pixels. The more pixels you have on-screen, the more detailed the image… and 4K is roughly four times sharper and more detailed than normal HD. In fact, the latter is made up of only 1920 × 1080 pixels on-screen, whereas 4K weighs in at a much denser 3840 × 2160 pixels instead. Meanwhile, HDR enhances the colors displayed on your screen by increasing the contrast between bright whites and dark blacks - it allows for a greater range of shades, making images seem much more vibrant and layered than they'd otherwise be. In short, all these come together to give you the best version of these movies and shows currently available without picking up expensive 4K Blu-rays. You'll have to have a TV capable of 4K and HDR in the first place to take advantage of it, obviously, but those are becoming more affordable by the day (as shown by our guide to the best gaming TVs). And if you're still not sure? Hey, there's always the Disney Plus free trial to give you a taste of what's available.

If you do decide that Disney Plus is for you, there are more than a few deals out there to help you save money along the way. For example, this cheap Disney Plus deal gets you ESPN+ and Hulu as well for only $12.99 if you're based in the US. Already subscribed to ESPN+ and/or Hulu? You'll get a discount.

We've listed the best offers below to get you started.

Cheap Disney Plus deals (US)

Disney Plus | $6.99 per month
This is the standard subscription for Disney Plus, and it comes with 4K and HDR as standard. A bargain.View Deal

Disney Plus, Hulu, ESPN+ | $12.99 per month
This deal is arguably the best value for money, as it provides something for everyone in the family.View Deal

Disney Plus
You'll still get a good price around the world; in Canada and Australia it's $8.99p/m, while New Zealand pays $9.99p/m.View Deal

In the mood for other bargains? The Black Friday game deals are about to begin, so keep an eye on our hub to make sure you don't miss any offers.