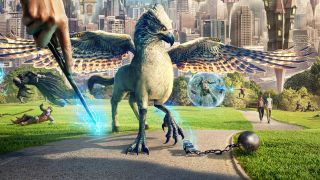 Harry Potter: Wizards Unite has barely been out for a week and already Niantic and Warner Brothers Games have confirmed that the first fan fest is going to be running from August 31 - September 1, in Indianapolis, in the White River State Park. Aaaand that's all we know about the event so far. No, seriously. The press release states that players "will be able to engage in a variety of interactive experiences bridging the in-game experience with the real world", and there's almost definitely something special being planned for the event, but Niantic are remaining tight-lipped about it for now.

Niantic and Warner Bros confirm that you'll be able to "discover mysterious artifacts, cast spells, and encounter fantastic beasts alongside their friends and other players," which is very similar to what you can do right now in the game. Doubtless there will probably be a special spell to try out for the first time to entice players to come and give the game a go in a different environment, or even a one-of-a-kind potion ingredient that can only be collected in the White River State Park for those two days.

Heck, maybe Niantic and Warner Bros Games will combine spells with Portkeys, meaning that you'll be able to cast spells in the AR rooms to open chests or fight creatures. If you fancy heading along to the fan fest yourself instead of just reading my wild guesses about what it could entail, you should keep your eyes on the official page for the event to find out how to enter a lottery that'll decide whether you're eligible to buy tickets for it.

If you're looking for another game to play, keep an eye out for the best Amazon Prime Day game deals right here, or look below to see what you need to know about Harry Potter: Wizards Unite!