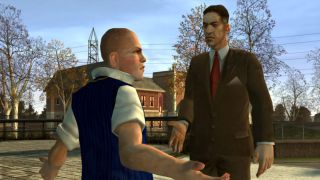 The GTA Online casino update brought glitz, glamour, and an unexpected tribute to a cult favorite game that some fans are hoping is a sequel tease. The surprise arrived in the form of one of dozens of art pieces that players can display on the walls of their new casino penthouses; nestled among works with titles like "Let's Subvert It" and "Subtletly" is a painting called "Canis Canem Edit", which is both the motto of Bully's Bullworth Academy and the European title for the 2006 open-world game.

The art piece itself is a painting divided into four panels of scribbly art on blue or green backgrounds, which are Bullworth's school colors. The panels depict a fist, a snake, a skull, and a rat, which are the icons of the Bullworth Academy crest, and they're even arranged in the same order. It's unquestionably a nod from Rockstar toward the cult classic of acing tests and pulling pranks. The question that remains is whether this is just Rockstar showing some love for Bully, or if it's teasing something more.

Reddit user MareeCena noticed that the in-game name of the artist for "Canis Canem Edit" is Michael Morse, which prompted users to convert the patches of red and gold paint into the dots and dashes of Morse code. With some interpretation, they spell out "Dan4" or some other combination of those characters. Who is Dan? Maybe Rockstar co-founder Dan Houser, who was a lead writer on Bully, and this Easter egg is literally "for Dan"?

If the painting really is meant to be a coded Morse code message, it doesn't seem to be teasing anything about a sequel. Still, don't give up hope that we'll return to Bullworth someday. Rockstar does love to throw out a surprise every now and then just when you think it's fully locked into its cycle of blockbuster open-world games. Maybe someday Bully 2 will be that surprise.

Find more lands to explore in our list of the best open-world games.