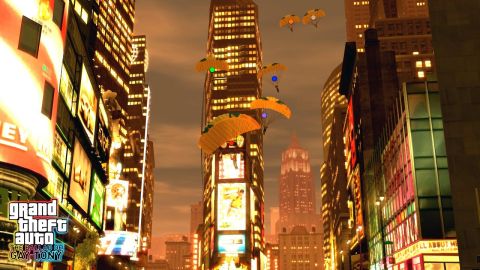 Well, here we are at last: nearly three years afterRockstar told us it wasn’t going to happen, the formerly 360-exclusive, downloadable episodes for Grand Theft Auto IV – The Lost and Damned and The Ballad of Gay Tony – are finally on PS3. So if you missed out when the GTA IV trilogy wrapped on 360 six months ago,now's your chance to see Liberty City through two fresh sets of eyes: those of biker-gang lieutenant Johnny Klebitz and nightclub henchman Luis Lopez. And if you did miss it, then you'll be glad to know Episodes from Liberty City was worth the wait.

Above: Especially because of the parachutes

Aside from the PS3 controls, a brief installation the first time you start up,and a few changes to the European version – which, while we haven't actually seen or heard them, areapparentlyonly to radio, internet and TV content – Episodes from Liberty City is identical to the two-part anthology that dropped on Xbox 360 last October.That also means there's nothing new or exclusive for PS3, but if all you've played is GTA IV, the two new storylines – which run parallel to GTA IV's, and regularlyintersect with it and each other – add a hell of a lot to the experience.

For starters,they fillin a whole lot of GTA IV's plot holes, and only by playing through as all threeprotagonists can you get a complete picture of what's reallyhappening, and why. What happened to the diamonds Niko fought for and lost? Why did Bulgarin disappear so soon after his introduction? And what exactly the hell is Brucie's deal? Not only will you get the answers to these and other questions, but you'll also get access to a bunch of new vehicles, weapons, multiplayer modes andless irritating friends. Best of all, you'll get to undertake around 50 new missions, all of which now sport a huge, long overdue improvement: mid-mission checkpoints, which ensure that you don't have to start over every time you die or otherwise fail.

Above: Seriously, this shit could get really irritating otherwise

So collectlvely, the new episodes bring a lot of cool new stuff to the table, but how are they individually? Because they were originally two separate games, we've written two separate reviews; to jump straight to them, click the images below,and thenhit up the last page for the cumulative score.