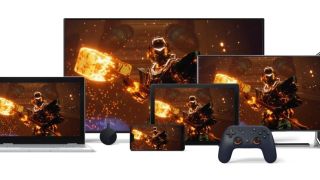 I grew up playing games in unlit monochrome on a Game Boy Pocket. When, at age seven, my family brought home an Nintendo 64, experiencing Mario in 3D felt like magic. So I don't know how else to put it: seeing Destiny 2 run on Google Stadia for the first time struck me as miraculous.

This came as a big surprise, because I thought Stadia sounded, on paper, like an awful gimmick that wouldn't prove viable in a games market with Microsoft, Nintendo, Sony, and wild disparity between internet providers. But after spending a few days with a Stadia controller and Pixel 3a XL smartphone (along with the one-year Stadia Pro subscription provided to reviewers), this longtime Destiny player is now a believer.

Stadia's being billed as the "place for all the ways we play," and Nintendo Switch owners can testify to the appeal of a flexible, portable machine that lets consumers play games wherever they want. With the power of cloud computing, Stadia delivers one of the best examples of Switch-style adaptability I've ever seen. To be as specific as possible, I split my time with Destiny 2 on Stadia between a 70-inch 1080p Samsung TV (bought in 2015) and the Pixel 3a XL, which I clipped directly to the controller. My internet provider is Xfinity; I live in the rural Midwest; and I'm getting download speeds of roughly 239 Mbps, upload speeds of 12.1 Mbps, and a 17-millisecond ping while sitting in the same area as my router.

The overall quality of your Stadia experience will obviously vary depending on the Wi-Fi you have available to you in a given situation – but, theoretically, you can now enjoy your favorite space MMO, on a phone, at your local coffee shop. What a time to be alive.

On the Xbox One alone, I've logged 1,974 hours in the original Destiny and roughly 777 hours in Destiny 2. Not to mention the time I've spent on the PS4. I'm a Destiny player; I've been slaying Vex Minotaurs and waking the Hive since September of 2014.

And what Destiny excels at, by design, is providing what Bungie refers to as "the hobby game" – a fun, casual, perennial pastime you can pick up and enjoy with friends over a span of five or 10 or many years. Some of my fondest gaming memories involve partying up with people I played Halo with in high school, or with complete strangers, and taking down Atheon in the Vault of Glass, or Oryx, or Emperor Calus. Today, I believe that, outside of a full-featured gaming PC, Stadia now offers the best plug-and-play Destiny experience available.

Depending on where you're based in the world, you're going to have a different experience with Google's new streaming service. If you're looking for general impressions out of the UK, why not check out the GamesRadar+ Google Stadia review in progress.

The most immediate benefit is that Destiny 2 runs at a smooth 60 frames-per-second on Stadia. For players like me, who have been dealing with 30 frames-per-second on the baseline PS4 and Xbox One for five years, this is a massive improvement – a luxury once thought to be unattainable on anything but a PC. Playing Destiny on Stadia looks and feels like all those Twitch streams I've watched over the last two years, envious of folks experiencing Bungie's sandbox shooter at lightning-fast, Call of Duty-esque speeds.

If your child or partner commandeers the television, that's where Stadia really shines. Imagine playing Destiny 2 at 60 frames per second, with the same controller, on a laptop, tablet, or smartphone – with no noticeable compromise in frame rate or responsiveness. You may notice a very occasional reduction in texture, and there's a touch of input lag, but the trade-off is a no-brainer: this is the Destiny I've been wanting since day one, and it can be had for about $129, plus $9.99 a month after the first quarter.

With potential concerns about data limits set by your ISP, and all that time you've invested in Destiny on PS4 or Xbox, is it truly worth it to make the jump to Stadia? That'll depend entirely on the individual, but my days of playing Destiny on the Xbox are over; I couldn't possibly go back.

Hope for the future

If you've got a gaming PC, there's little incentive to choose Stadia over Steam – other than having the added option of a portable Destiny, which even at home is pretty incredible. And you may, of course, have a group of people you raid or play Crucible with who have no interest in trading their console for a newfangled gizmo from Google. But for casual yet dedicated players, solo or otherwise – for those who play Destiny 2 more than any other game, and want to enjoy it to the fullest – Stadia is now the supreme Destiny 2 experience on console. I would never have guessed it in a thousand years, but here we are.

Google sent a team of developers to work at Bungie for six months, making sure the port was the absolute best it could be, and all that extra effort shows. I still expect a lot of continued skepticism, naturally. ("A console that's just a controller? You can't install your games on a hard drive?") But once people get their hands on this thing and try it out, Destiny players in particular are going to be wowed by just how closely it emulates the traditional PC experience.

Running strikes I've played a hundred times is fun again; I've got a reason to put down Call of Duty: Modern Warfare or Star Wars Jedi: Fallen Order and hop back into the Crucible. Things like Iron Banner and the inevitable return of Trials of Osiris sound exciting again, in a way I never could've imagined without upgrading to an expensive PC.

Stadia ships with basic multiplayer functionality, like a party-chat system and friends list, so some more basic social features would round things out nicely as Google iterates on the platform. Between Bungie's clever "Cross Save" system – letting you play with your existing Guardian characters across PS4, Xbox, PC, and now Stadia – and the promise of cross-platform multiplayer, which the developer continues to tease, Stadia seems like a worthwhile investment. Especially for anyone who's ever half-jokingly referred to their console as a "Destiny box."

Guardian, do you want to get Google Stadia ready? Then you'll need to read this guide on Destiny 2 cross save which will walk you through how to set up your cross save account and play on multiple platforms.