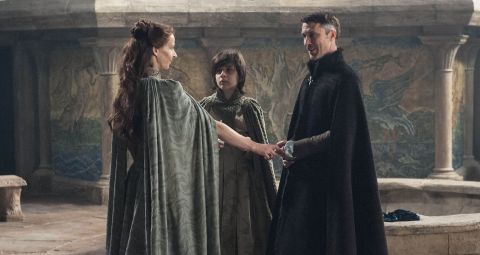 The standout moment of the episode is the assault on Craster’s Keep. It’s tense, gruesome and well shot – everything we’ve come to expect from a Game Of Thrones fight scene. But it’s not all about swords – words can be just as sharp, as Cersei and Margaery prove in a deliciously bitchy moment at Tommen’s coronation. The game keeps going, and everyone’s playing it perfectly.

Jon Snow and his merry band of Night’s Watch brothers storming Craster’s Keep is a big moment for Lord Snow and his role in the Watch. It’s a turning point where he first shows how well he can handle taking command. Turns out when Kit Harington isn’t being broody and whiny he makes a pretty inspiring war leader. The fight in the dark, snowy exterior of the keep has a frantic feel and you aren’t always sure if it’s a brother or a betrayer of the Watch who is being brutally murdered.

The standout moment has to be Jon’s fight with the repulsive Karl Tanner. It’s tense, Karl is just as good with his knives as his reputation says and Jon does seem to be in a spot of bother. If it wasn’t for the books you might actually be worried for Jon’s life. But even though we’re on a show-only timeline this can only end one way – Karl getting stabbed. Jon’s sword Longclaw appearing through Karl’s mouth is a brilliantly gruesome shot. The kind of realistic image that makes you clench your teeth and put your hand to your face, making sure there’s no sword about to ram through your own skull.

Dany and her counsel discuss her plans for conquering Westeros, Sansa meets her mad aunt and Jon and his brothers venture beyond the Wall looking for vengeance.

The quick switches between Jon’s fight outside and Bran’s fight just moments from where his half-brother is add to the tension. Will they meet? Will Jon save the day? Sadly not. It’s a frustrating near miss – a Stark reunion is long overdue. And, since we’re off-book here, it feels oddly uncharacteristic. Bran being that close to Jon, out beyond the Wall, it feels like he should say something. Jon understands duty, he would probably let his brother go on to find the Three-Eyed Raven. But maybe that’s just madly unfounded optimism from someone who would for once like to see two Starks talk to each other. It has been a long, long time since Jon saw any of his family. Just once, can’t something nice happen to the Starks?

There is one heart-warming reunion though – between Jon and Ghost, his often absent direwolf. “Where in Seven Hells” indeed – we simply have not been shown enough direwolf these past four seasons. Yes the special effects budget is limited and dragons are cooler, but Ghost is meant to be Jon’s constant companion, and it’s a struggle to remember when we’ve ever seen that. In the books they are close, but here, although the script shows a happy reunion you can’t help but think that Jon hasn't mentioned him all season. Hopefully he’s back for good now, and will be more than just a passing blur of white fur.

Elsewhere in Westeros Lysa Arryn is busy being bonkers. She’s well and truly one of Westeros’s biggest weirdos but even so her scene with Littlefinger, where she so obviously explains how they were behind everything, just feels out of character. Surely no one, not even Lysa, is foolish enough to go prattling on about how you were the one to cause a war that burned down half of Westeros. In doing so she reaches new heights of comically weird villainy, if that is possible. She may as well start twirling a moustache. It’s all too on the nose.

As always there are too many excellent moments to go into detail about. Cersei and Margaery’s conversation about whether or not Margaery will marry Tommen is gloriously acerbic. Arya and The Hound continue to cement themselves as the best pairing in all of Game Of Thrones. Forget the books – let these two have a spin-off. Daenerys is getting well and truly tangled in the infamous Meereenese Knot. For readers this will be the cause of many a frown and plenty of worry. But we know that HBO are happy to deviate from the books so many it would be quite as knotty as it is on the page. Or so we hope. These are just a few gems from another solid episode. It seems, even halfway through the fourth season, Game Of Thrones struggles to put a foot wrong.