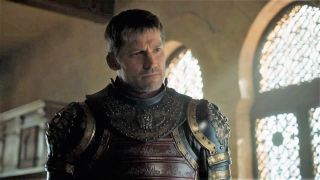 The backlash to Game of Thrones season 8 still cuts deep for some cast members. Nikolaj Coster-Waldau, who played Jaime Lannister on the show, has recently revealed his frustrations over the fan criticism that punctured the HBO epic’s final six episodes, as well as his opinion on the showrunners, and the anger that trickled into the cast’s WhatsApp group.

During the recent Con of Thrones event (H/T Huffington Post), Coster-Waldau said the discussion around Game of Thrones season 8 was “extraordinarily intense”. He went on to discuss the pressures put on the show: “There was that kind of weird feeling of, ‘What the hell? We worked so hard,’” Coster-Waldau said. “I’m not asking anyone to feel sorry, by the way. That’s not what I’m saying. I’m just saying how it was to get through that whole thing.”

The most outspoken criticism from fans was against Game of Thrones showrunners, DB Weiss and David Benioff. Coster-Waldau defended them to the hilt, saying: “For anyone to imagine or to think that the two creators of the show are not the most passionate, the greatest, the most invested of all, and to for a second think that they didn’t spend the last 10 years thinking about how they were going to end it is kind of silly. Every single person and there are thousands ― we worked our asses off to make the best show we could for the ending.”

Whether you agree with that sentiment or not, it’s undeniable that Game of Thrones season 8 involved a lot of work, from those in front of the camera and those behind it. The cast’s WhatsApp group also felt the full brunt of it, with the Jaime Lannister actor revealing that, although he didn’t give out the names of those affected, he “saw some people getting a little upset because some of the stuff is vicious.”

That emotional reaction, when coupled with the San Diego Comic-Con 2019 schedule revealing that a Game of Thrones panel – involving the showrunners – is just days away, it’s clear that the debate surrounding the show’s final season hasn’t died down yet. Author George R.R. Martin has even seen fit to publicly announce that the reaction to the show won’t affect the book’s ending. This isn’t over yet – not by a long shot.

There's still time to get in on the action: Here are the best Amazon Prime Day game deals.