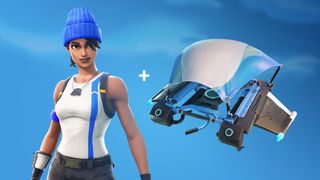 You have got to hand it to Epic Games. Despite Fortnite Battle Royale being plagued by frequent spurts of server downtime over the last few weeks, the studio continues to run at a breakneck pace when it comes to embellishing the game with new content and updates, most of which are free for everyone to enjoy.

Last week, we got the Valentines’ Day crossbow, and Epic laid out an exciting state of development roadmap for the future, detailing 6 changes coming to Battle Royale that already have us doing our best victory dance.

Today’s update, which is now live and playable, brings a host of new tweaks and goodies to the mix, on top of a special surprise for any PS4 players who want to express their true and blue colours with a touch more pizazz.

The impulse grenade is a new projectile weapon that knocks both enemies and allies into the air if they’re caught within its explosion radius, making it great for throwing people off cliffs to certain doom or getting yourself and your teammates to a higher vantage point with the tap of a button.

The grenade comes in Blue level rarity, but can be found in treasure chests and supply drops only, so don’t expect them to be lying around the map like free candy.

Then there are the shrines. These are treasure-filled buildings hidden across the map, randomly generated whenever a new match starts up. If you manage to come across one of these, and it hasn’t already been looted, it could be a game-changer for your chances in the path to Victory Royale.

And finally, without much warning or notification, a Playstation Plus Celebration Pack slipped on to the PSN store yesterday, offering a free outfit and glider skin to PS Plus subscribers for free.

Considering that most costumes in Battle Royale will set you back a fair few V-Bucks, this is definitely something you’re going to want to get in on, but there’s no rush, as the pack apparently doesn’t expire until on February 1, 2019.

It’s unclear why Epic has created this, or indeed whether PC and Xbox One players can look forward to something similar, but could this be the apology present that was promised after PS4 players were unable to log in for a consecutive period of days last month? No one knows, but no one’s complaining either.

In other news, the update also contains a bunch of smaller hotfixes for Battle Royale, while the crossbow, mini-gun, and scoped assault rifle have all been nerfed in one form or another.

Oh, and a bunch more changes are coming to Save the World today too but, let’s be honest, you were never here to read about those, were you?  You can read the full patch notes here.