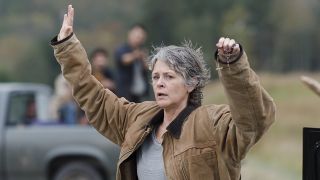 Admit it. You’ve thought about what you’d do if a zombie apocalypse were to suddenly strike. Perhaps you’ve even eyed that Lord of the Rings sword posed artfully on your bookshelf and hypothesized about how effective it would be against a rotting skull. Yet when we see survivors battle it out with the undead onscreen - yes, The Walking Dead season 8 and Fear the Walking Dead, I’m talking about you - more often than not it’s impossible to imagine yourself in their shoes. They’re a cop who’s familiar with firearms (hello, Rick), or have a frickin’ samurai sword, or after an initial wobble when they kill their first zombie, don’t seem to be bothered by death anymore. That’s not normal. And more normal people - characters who have zero survival stills to begin with - is exactly what’s needed in TV shows about the shambling undead.

As soon as it gets to the point where animate corpses freely roam the streets, ordinary people seem to become desensitized to everything happening around them. They find no issue with caving in a zombie’s skull despite the fact that only a day or two ago they were a gibbering wreck after having killed their first walker. I’m convinced it would take a lot more time for any ordinary person to get used to the food chain being rearranged. Introduce someone who’s only ever been an office drone to a post-apocalyptic scenario, and you’ve got yourself one hell of a character arc incoming.

Take Carol Peletier, the strongest woman on The Walking Dead - arguably even the strongest character - who started off meek and defenceless. With her lack of weapons training and fear of her colossal dick of a husband, it almost looked like she would be one of the first to die. Yet Carol stuck it out, overcame the devastating loss of her daughter Sophia, and grew tougher with every single episode precisely because she had zero skills to begin with. Meeting Carol when she already had her hardened survivor face on wouldn’t have had nearly the same impact, as once characters get to that endpoint it’s tricky to find a way for them to develop any more. This way we got to follow her every step of the way as she was forced to learn and adapt. Looking at Carol, you can see what could happen to the ordinary person walking down the street if the dead were to rise. First would come the fear, then a gradual increase in confidence (unmarred by a false sense of security because you think you’ve already got what it takes to survive), and then you’d develop skills tailored to surviving the zombie apocalypse. Either that or you’d be walker chow the moment you stepped out of your door.

We only get to meet Michonne once she’s gone through her ordinary-person-turned-survivor character arc. I’m just going to say that again: Michonne, wielder of the samurai sword, started out ordinary. Brought up in a middle class family, in the TV series she worked in the legal industry before everything went to shit. Not that you’d think that was the case thanks to her certified badassery in The Walking Dead. Wait, I’m not done yet. In case you needed more proof that ordinary people get the best character arcs, Glenn (rest in peace) is a classic example. Starting off as a pizza delivery boy, unsurprisingly his knowledge of the Atlanta streets came in handy when going for supply runs. Given seven seasons, he goes from being the supply run gopher into Rick’s right-hand-man.

Seeing ordinary people like you and me discover that they have a knack for surviving in the most unexpected way is what makes the zombie apocalypse such a compelling topic. We want to reassure ourselves that it’s possible for us to survive such a terrifying event, even if we don’t know how to fire a gun and spend most of our time staring at computer screens (yes, I’m talking about you). Fear the Walking Dead’s Clark family proves that you can make it even if you have no idea how to handle a gun and the most offensive thing in your house is a baseball bat. Humans are a resourceful lot. Every now and again we just need reminding that our ability to survive isn’t non-existent just because we’re not rippling with muscle or have advanced medical know-how.

Slow and steady is the only way to give ordinary characters the arcs they deserve. Fear the Walking Dead had just two episodes before there were riots in the streets, and the usual high-tension cycle of fleeing, finding refuge, and walker-killing kicked in. It’s a shame, because before that point you could feel the outbreak gradually escalating in all the right ways. Media coverage about police being accused of shooting innocent civilians, weapons being brought into schools, and rumours of an illness going around all permeated the first episode. Yet these were already issues that were at the forefront of public consciousness rather than being quiet rumblings on the internet. If a series spent most of its episodes showing those rumours first appear on internet forums, then be the topic of hushed gossip in the supermarket, before erupting into the riots in the season finale, there would be plenty of time to familiarise yourself with ordinary characters and anticipate how they’ll respond to the undead shambling through the streets.

Lay this groundwork and you’ll have the perfect basis for some incredible character arcs. Escalation is a natural part of most TV shows, and when they’re all about zombies it’s understandable. You can’t really avoid humanity going down the drain when you have an exponentially-increasing number of walkers loitering out and about. Just put in the time before everything goes to shit where we get so see ordinary characters being ordinary and having no idea what is going on, and you’ve got some top-notch arcs on the way.

For more undead goodness (a questionable concept, I know) read With State of Decay 2 coming soon, here's why the original is still the best zombie game ever