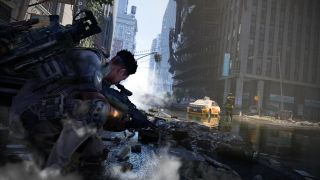 The Division 2 is heading back to New York City for its biggest expansion yet in Warlords of New York. The new campaign will kick off starting on March 3 and Year 1 pass holders can access a prologue mission, Episode 3 - Coney Island: The Hunt beginning on February 12. Those who do not have the Year 1 pass can dive into the prologue on February 19.

The expansion brings agents back to where it all began: New York City. Agents will be on the trail of Aaron Keener, a former Division agent gone rogue. Along with his rogue agents, Keener is described as a major threat to the burgeoning rebirth of civilization. Players will explore what was once a Dark Zone in Lower Manhattan, including famous landmarks like Two Bridges, Chinatown, and Wall Street. Players will be able to travel freely between D.C. and New York like a post-apocalyptic road trip.

The marquee gameplay changes come by way of what Ubisoft is calling an “RPG overhaul” of the game, which seeks to redefine build diversity, streamline gear, and provide better loot across the board. Changes to the UI promise players will always have quicker access to the roll ranges of each gear item. God rolls return too, giving players a better understanding of what kind of benefits their gear items provide. Dark Zones are also being tweaked to focus more on rogue agents in an effort to drive more emergent PvP moments.

The player level cap is increasing too, from 30 to 40, alongside a new "infinite progression system" called the SHD Level. In addition to those new cap feathers to chase, four new skills and, for expansion pass owners, more new weapons and gear. Endgame content is being rethought too, and starting one week after Warlords of New York is released, Seasons come to The Division 2. These three-month-long Seasons will introduce new Manhunts featuring a network of criminals and a central Big Bad to track down with new goons to hunt down regularly, each with unique rewards.

Seasons will bring more than the Manhunts to the cities of The Division 2. With Leagues, new challenges will aim to keep players invested and always ticking the next box, while Global Events are coming back too, which add modifiers across the board and ask players to overcome the temporary gameplay changes.

Players invested in the story or some fancy new loot are encouraged to check out the free prologue mission starting tomorrow. Coney Island - The Hunt brings with it two main missions, two “classified assignments” for pass holders, a new Specialization, plus new weapons including an exotic weapon.

If you’d rather hunt the best weapons than rogue agents, use our guide on all Division 2 exotics.