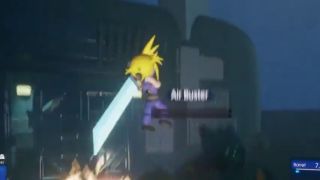 We'll be waiting on the Final Fantasy 7 Remake until March 3, 2020, but you can play the Dreams version right now. Dreamer sosetsuken5360 made the impressive project that applies the upcoming remake's Final Fantasy 15-like action combat to the Air Buster battle from near the start of the game. You can play it on the Dreams Creator Early Access right now.

The Final Fantasy 7 remake goes hard for photorealism (like a playable version of Advent Children, basically) but the Final Fantasy 7 Dreamake goes in the opposite direction, with adorably big-headed versions of Barret, Cloud, and Tifa that evoke the out-of-combat models from the original PlayStation game.

On top of letting you execute special skills in real-time, you can even swap between characters as you enjoy watching those big ol' damage numbers fly around. Remember when JRPGs were the only games that had those? Or you can just stand around and enjoy all of the moody, misty lighting.

Can you imagine showing this to a Final Fantasy 7 fan back in 1997 and telling them that one person made it with a video game? A different video game, I mean? They'd probably try to suffocate you with their JNCOs so they could keep playing it themselves. They might regret it after they realize it's just a demo and you can't do anything besides fight Air Buster over and over again, though.

Square Enix has confirmed that the first episode of the Final Fantasy 7 Remake will only cover Midgar, so if sosetsuken5360 keeps at it they have a very real chance of remaking the entire game long before the official developers do.

Continue your journey with this chilling rendition of Dreams Storm Area 51.