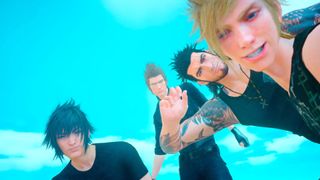 If you've already completed Final Fantasy 15, well then first off, holy cactuar, congrats to you. I haven't even had time to start the dang thing. Secondly, you can relive the adventure all over thanks to a New Game+ patch that Square Enix released today.

As you might suspect, New Game+ in Final Fantasy 15 allows you to  restart Noctis' tale from the beginning, but this time with most of your weapons, gear, magic, and skills carried over from your initial playthrough (the car won't fly and you'll have to rebuild the Engine Blade if you want the Ultima Blade). Enemies won't scale to your level, so suffering through the Pitioss Ruins really pays off and you'll be able to trounce foes that once gave you a hassle.

The patch comes just one day before FF15 is slated to get a whole bunch of holiday DLC - some free, some not so much. So give thanks to Santa Enix (Square Claus?) for the gifts and enjoy.