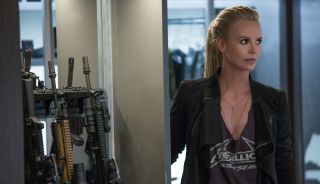 Last month we got the exciting news that Furiosa herself Charlize Theron had signed on to play the big bad in Fast & Furious 8. Exactly how Theron's villainess will attack Dom and his team remains to be seen, but thanks to a tweet from Universal Pictures we now know she goes by the name Cipher.

The image - which sees a badass Theron standing next to a bunch of big guns - doesn't really reveal much other than the Mad Max actress looks good in a Metallica T-shirt. I'm looking forward to seeing what director F. Gary Gray has planned for her character though, and with any luck Fast & Furious 8 won't be the last time we see Theron in the franchise.

Directed by F. Gary Gray and starring Vin Diesel, Dwayne Johnson, Charlize Theron, Kurt Russell, Michelle Rodriguez, Tyrese Gibson, Ludacris, and Jason Statham, Fast and Furious 8 is due to open in the US and UK on April 14, 2017.