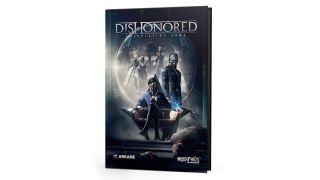 Ever wonder what goes on in the world of Dishonored beyond the lives of Corvo, Emily, Daud, and Billie? You and a group of friends can play to find out when the Dishonored tabletop RPG arrives this summer, a new collaboration between Bethesda, Arkane, and tabletop gaming company Modiphius. It's built on the same base system as the upcoming Fallout tabletop RPG, which already has my mind brimming with weird ideas for sneaking into posh manors defended by trained Deathclaws.

According to Modiphius, the Dishonored RPG was developed "in close collaboration" with Harvey Smith, the co-creative director of the franchise. Beyond Smith, several of the artists and writers who worked on the RPG also worked on the video games, which should help it feel nice and authentic.

The 300-page book will include a setting guide that lays out the histories and cultures of Dishonored's Empire of the Isles - for lore hounds that may be worth the purchase by itself - a starting adventure, and a guide on how to create and play your own unique band of Protagonists. I'm guessing the capital "P" there is meant to underscore the fact that you're not necessarily playing heroes, just people trying to make it in a corrupt and merciless world.

Modiphius says the Dishonored TPRG will run on a streamlined, narrative-focused version of its 2d20 system that "focuses on fast-paced storytelling and showcasing the strange powers of the Void and the ever-present Chaos mechanics". The Chaos system is how the Dishonored games reflect your moment-to-moment choices in the broader world, so I'm eager to see how an RPG will codify those mechanics. And Void powers are always rad, naturally.

With both Dishonored and Fallout 2d20 games on the horizon, I've gotta wonder if an Elder Scrolls adaptation is on its way next. That or Wolfenstein. I'm always up for rolling dice and killin' Nat-zees.

Hey, if a Dishonored TRPG sounds good, you should also check out our guide to the best tabletop RPGs and scroll down to Blades in the Dark.