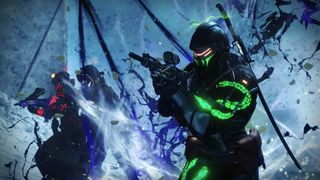 Destiny 2 hasn't received a proper update in nearly a month - Bungie seems to be saving major sandbox changes for Destiny 2 Shadowkeep - and update 2.5.2.2 is bite-sized at best. But as short as they are, the latest Destiny 2 patch notes are chock-full of quality of life changes, quest nerfs, and loot buffs.

This update is especially great news for collectors, as several highly coveted weapons are now much easier to get. Firstly, when acquiring the Braytech weapons offered by Ana Bray - which are tied to the infamously RNG-dependent Wayfarer seal - you'll now have a greater chance of awarding weapons you don't already have. You can also acquire weapons more rapidly since Braytech Schematics are no longer limited to one per day per account (though Bungie points out the in-game tooltip still says they are). These Schematics will also drop from Rasputin Data Caches - those little floating diamonds on Mars - more frequently, so expect to see more Wayfarers running around here soon.

In a similar vein, the weapons from Gambit Prime and Reckoning will now drop more frequently. Players have reported receiving weapon drops as frequently as 60% of the time since the update, and Bungie says players will never go more than four matches without a drop thanks to new bad luck protection. Reckoning has also been adjusted to compensate for recent Exotic nerfs, so it'll be easier to complete. If you're chasing a god-roll Last Man Standing shotgun or Spare Rations hand cannon, now's the time to grind.

Finally, after years of overflowing inventories and Vaults, Bungie's increased the stack limit for planetary materials, gunsmith materials, and tokens for the Vanguard, Crucible, and Iron Banner from 999 to 9,999. This should free up some Vault space that you can fill with Destiny 2 Armor 2.0 gear once Shadowkeep is out.

You can read the full patch notes in Bungie's post.

Here's everything you need to know to set up Destiny 2 cross save and prepare for the Destiny 2 Steam transfer.