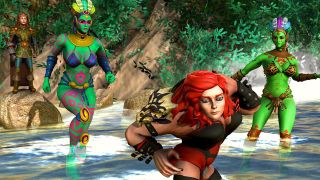 On one level E4’s new sitcom Dead Pixels isn’t really sci-fi or fantasy at all – it’s set in the present day, there’s no futuristic tech and its characters have no out-of-the ordinary abilities. But a large chunk of it is set in an epic swords-and-sorcery world, the sort that millions of people have experienced for themselves... on a computer screen.

The brainchild of Jon Brown (a writer who can list Misfits, Fresh Meat and Cuban Fury on his CV), Dead Pixels started out as “Avatards”, a series of short comedy “Blaps” on Channel 4’s website back in 2016. Now E4 has invested in a fully blown expansion pack to turn it into a whole series about gamers obsessed with (fictional) online roleplaying game Kingdom Scrolls, which premieres on March 28, 2019.

“I guess it was a subculture that I felt was underrepresented,” Brown tells our sister publication SFX magazine. “I find it funny, the absurdity that you can spend so much time on achievements that have no real value apart from the value you put on them yourself. When I think of gaming it is a waste of time, but it’s kind of the most meaningful way you can waste your time.”

Dead Pixels is written by a former games journalist

As a former video game journalist, Brown was keen to make sure that the game that dominates the lives of central characters Meg, Nicky and Usman was as accurate as possible. “I didn’t want it to feel like it was a parody of an online game,” he explains. “I wanted it to feel like it really could be something that people could genuinely invest in. It’s very much in the kind of Elder Scrolls Online/Final Fantasy Online wheelhouse, and it plays on lots of the tropes that you would get in those kinds of games. I wanted it to resonate with people who play games, so they’ll watch it and they won’t feel like it’s just another piece of shit that doesn’t understand what video games are about.”

The show even used the real-life Unity game engine to construct the world of Kingdom Scrolls, so while you shouldn’t expect to see the hyper-reality of Steven Spielberg’s Ready Player One, it may feel a little more authentic. “It felt like the comic version of this was to have characters treating the world incredibly seriously,” says Brown, “but when we cut to the game it’s slightly creaky and glitchy, so a character might get stuck in a rock so they can’t move. These characters treat the game like it’s life or death, but every time we cut to it’s like they’re just stood there clonking something repetitively, watching the same animation again and again.”

The show is keen to avoid lazy gamer stereotypes

Brown also wanted to make sure his characters weren’t just lazy geek stereotypes afraid of interacting with people. “That geeky, gamey type is a common trope in film and TV, and it was about trying to avoid some of that,” he explains. “They can function in the real world but they also have this other part of their lives that is incredibly important to them. They certainly wouldn’t see themselves as outsiders and losers, they would think of themselves as being fairly well adjusted. Though obviously that’s not always true, because in terms of sitcom it’s always good to have characters that have a lack of self-awareness, a kind of blind spot that they can’t see."

The most anticipated new TV shows of 2019

“The characters have shifted around a bit from the Blap,” Brown continues. “The relationship between Meg [Alexa Davies] and her flatmate Nicky [Will Merrick] feels slightly more layered, so they’re possibly secretly in love with each other but they’re too emotionally stunted to try and figure out what their relationship really is. We’ve also changed their flatmate, who’s now Alison played by [Fresh Meat’s] Charlotte Ritchie, who instead of being an aggressive kind of bully is more aggressively lovely. She’ll try and take care of them, or leave food outside their rooms, because she’s worried they’re incapable of looking after themselves. Meanwhile, they constantly feel like Alison is trying to ruin their lives by trying to make the living room really nice.”

Ultimately, though, it should feel like a celebration of what it is to be a gamer. “I’ve spent a lot of time playing a game, Ghost Recon Wildlands,” Brown reveals. “In the end it wasn’t about the game, it was about the people I was playing it with. In a way the game was completely irrelevant and there was a horrifying point where you’d go and check your player stats and it tells you that you’ve spent something like nine hours on helicopter travel, just using a helicopter to get from one location to another! At that point it is like, ‘That is a lot of time wasted!’ But what else would I have been doing that was more productive? It was a good way to hang out with someone. So I guess Dead Pixels is a celebration but I also enjoyed the absurdity of it."

Be first to know about the best sci-fi movies, books, TV and comics by subscribing to SFX magazine and saving up to 60% on a print and digital subscription.