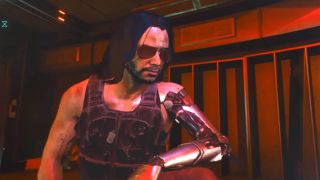 Cyberpunk 2077 has some big musicians on its credits. CD Projekt Red released a new behind-the-scenes segment about the game's music at The Game Awards 2019, highlighting the contributions of nearly a dozen artists and exploring the general tone of the soundscape of Night City.

We heard from Run the Jewels, Refused, Grimes, A$AP Rocky, Gazelle Twin, Ilan Rubin, Richard Devine, Nina Kravitz, Rat Boy, and Tina Guo - a hefty lineup which CD Projekt Red says is just a taste of the sounds to come. Speaking of which, several artists offered a bit of insight into their contributions and their evaluation of Cyberpunk's score.

"Even in the dystopian future, hard rap lives on," said the members of Run the Jewels. Contrastingly, Devine compared Cyberpunk's soundtrack to punk rock, calling it "rugged, rough, edgy music." Folding in a third genre, Rat Boy described it as "sort of mixing punk music and what electronic music could be in the future."

A recurring descriptor was "industrial," with Gazelle Twin and Deadly Hunta agreeing that Cyberpunk has a revolutionary sound to it - that is, literally the sound of a revolution in progress. I also quite liked Nina Kravitz's comment: "Psychedelic, trippy, yet uplifting and engaging." That sounds like the soundtrack to some city burning, all right.

The latest info suggests Cyberpunk 2077 will be shorter but more replayable than The Witcher 3, and like The Witcher 3, it'll feature mo-capped sex scenes which put the steam in steampunk. They probably won't include Keanu Reeves, though.