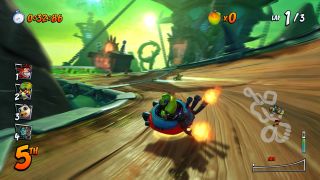 The fantastic Crash Team Racing Nitro-Fueled is adding microtransactions. The update releasing on August 2 will be adding Wumpa coins, in-game cash in the Crash Bandicoot universe, can be used to buy various skins in the Pit Stop store.

Details about how the microtransactions will work are scant, although we'll be able to test them out soon enough. Activision claims they won't change the core experience of the game, instead letting players who want to fast track their progress another option.

"Starting in early August, players will have the option to purchase Wumpa Coin bundles from their game console stores to supplement the Coins they earn by playing," Activision announced in blog post. "This option won’t change the game’s core mechanics – players will still earn Wumpa Coins by playing the game in any mode, just as before. They will just able to purchase additional coins if they choose."

The update also brings another grand prix, the Back N. Time Grand Prix, at 7am on Friday, August 2. It's available to all players free of charge. The new grand prix comes with new characters, skins, karts, customization items, and a new track.

We absolutely loved Crash Team Racing Nitro Fueled when it launched in June, citing its fantastic driving mechanics, deep attention to detail, and variety of courses. Although I must say that Mario Kart has always been better, sorry Ford.

Looking for some Crash Team Racing Nitro-Fueled tips? Check out 14 ways to be the best at Nitro Fueled.