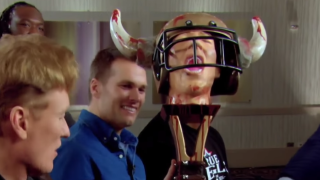 It's become tradition that ahead of the annual Super Bowl, talk show host Conan O'Brien brings members of the opposing teams together for a rousing bout of video games. In 2015, Rob Gronkowski and Marshawn Lynch went head-to-head in Mortal Kombat X. In 2016, Josh Norman and Von Miller slaughtered demons in Doom. This year, it's Tom Brady vs Dwight Freeney and the... erm, honor of which game to play goes to For Honor:

Truth be told, it's good to get a look at something like For Honor and see how it plays in the hands of your average (or clueless) gamer. I missed out on the beta so seeing it in live gameplay action was actually appreciated.

And, in true Clueless Gamer Super Bowl Edition fashion, the winners are presented with a horrifying trophy, and Marshawn Lynch makes a guest appearance. Everything's better with Marshawn Lynch.