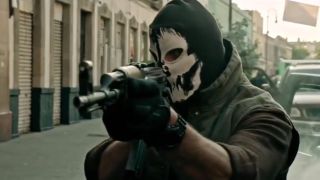 It was bound to happen sometime between now and the heat death of the universe. Call of Duty is getting a cinematic universe. Wait, come back! It might actually be good, promise. Want some proof? The director hired to kick off the franchise might not be a household name, but his previous work is very, very good – and it might just hint at what’s to come from the first CoD movie.

Stefano Sollima is his name, shooting guns very loudly is his game. While not officially confirmed, Variety has him pegged as being “in negotiations” with the movie wing of Activision.

So, unless you specialise in Italian crime TV (or are really into Sicario 2) then, chances are, you’re not going to know too much about Sollima and what he can do.

Sollima’s speciality is undoubtedly modern crime fiction and, you guessed it, explosive shootouts. Sicario 2 is on the horizon and, as the trailer below shows, he’s already very much knee-deep in the kind of action you’d come to expect from a Call of Duty movie. In fact, it’s very Modern Warfare. Check out those ski masks.

If you want to catch up on the director’s most recent work, Netflix is home to Suburra, a mafia drama set in Rome. You’d think it might be chalk and cheese when it comes to comparing it to the adrenaline-pumping machismo of Call of Duty but Sollima seems to subtly mix the rat-a-tat-tat of bullets with brilliant backdrops and an us-against-the-world approach, which is a must for CoD fans.

If you’re holding out hope for a Black Ops or, dare I say it, a Nazi zombie movie then the first instalment in the CoD cinematic universe might sidestep that completely in favour of a more straightforward, modern approach based on undoubtedly its most popular franchise-within-a-franchise.

This is only the beginning, though. Speaking to The Guardian last year, Activision Studios co-president Stacey Shur expects, “There’ll be a film that feels more like Black Ops, the story behind the story. The Modern Warfare series looks at what it’s like to fight a war with the eyes of the world on you. And then maybe something that is more of a hybrid, where you are looking at private, covert operations, while a public operation is going on.”

For now, it looks like we’ll kick off with a Modern Warfare movie, based on what the director brings to the shooty-bang-bang table. Happy with that, CoD fans?

To tide you over until then, check out the best Call of Duty games in our ranked list. Remember, no rushin’.