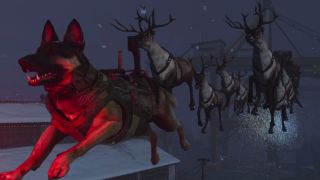 Call of Duty: Modern Warfare is celebrating Christmas in style, with a new Back to the Future-themed Easter egg that brings back the best boy from 2013's Call of Duty: Ghosts.

The Easter egg can be found on the remastered Winter Docks map in multiplayer, and requires players to perform a series of obligatory steps before the full sound and lights show takes place in-game. Check it out in the video from Presitgelskey below.

That's right. Riley the Dog is back! And it appears he's replaced Rudolph as the lead reindeer on Santa's sleigh, which also seems to have been commandeered by none other than Captain Price himself. Do I want to know what this seasoned killer did to the big man himself? Some things are better left unknown.

Riley's surprise appearance has arrived alongside the introduction of several new modes, maps, and Operators to Infinity Ward's competitive shooter, in addition to a number of balance updates and hotfixes outlines in the latest set of Call of Duty: Modern Warfare patch notes.

Meanwhile, a battle royale mode has been all but confirmed for the game via the latest set of leaks and datamined information, though Infinity Ward has yet to officially announced anything itself. Perhaps we'll learn more in the new year but, for now, feel free to spam that Riley Easter egg as many times as you like, reminding ourselves just how far Infinity Ward has come since the less-than-stellar Ghosts at the start of this console generation.

As the year and preceding decade come to a close, look back with us at the 100 best games of the decade.