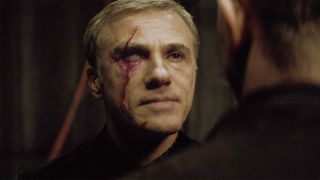 Been expecting him? Despite 007 getting the better of Ernst Stavro Blofeld in Spectre, Christoph Waltz is apparently returning as the villain in Bond 25. If that report rings true, that means Daniel Craig’s secret agent will have two major villains to worry about, as Rami Malek has also signed on to play an as-yet-unnamed baddie.

According to Daily Mail journalist Baz Bamigboye, Waltz has been seen at the iconic Pinewood Studios, where every 007 movie, from Dr. No to Skyfall, has filmed scenes. After supposedly being spotted by someone visiting the Bond 25 set, Waltz said, “You haven’t seen me.”

Exclusive:Hello Mr Waltz... we’ve been expecting you.#ChristophWaltz is back as #Blofeld in ⁦@007⁩ #Bond25 , shooting scenes at Pinewood studios . When a visitor spotted him , Waltz insisted , “You haven’t seen me.” pic.twitter.com/g1X91cEJbfJuly 11, 2019

Of course, as Bond fans know, villains returning – especially Blofeld – is pretty par for the course. Jaws returned after The Spy Who Loved Me, while Blofeld, the mysterious leader of Spectre, has faced off with 007 on numerous occasions down the years. He was even dropped into a chimney in For Your Eyes Only – but we don’t like to talk about that.

The last time we saw Waltz’s rendition of the character, though, he was being hauled in by M during the climactic final scene in London. No info has leaked out about Waltz’s role in Bond 25 (which still doesn’t have an official name as of writing), but you can’t imagine he would be the focus of the action, especially with Rami Malek playing the villain of the piece.

Whether a Raoul Silva-esque prison interrogation scene is in the works, or a final act plot-twist is being planned, it’ll be nice to see Christoph Waltz back as Blofeld. Spectre was controversial for a few reasons, including Blofeld’s shoehorned origins as Bond’s foster brother, but the man can act – and will surely menace 007 one more time before Daniel Craig drives off into the sunset.

Who starred in the greatest 007 flick? Craig? Moore? Connery? Find out in our best Bond movies list.