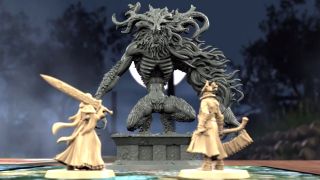 Bloodborne is getting an official board game adaptation thanks to a Kickstarter campaign  that smashed through its initial $200,000 goal in just 14 minutes. The cardboard-and-plastic version of FromSoftware's creepy classic lets one to four players become Hunters in several multi-session campaign scenarios, exploring the streets and structures of Yharnam as they clash with beasts in choice-driven combat.

If you were a little confused at first and thought Bloodborne already had a board game (like me), you're probably thinking of Bloodborne: The Card Game. That's a separate product that first came out back in 2016, though it was also made by the same company behind the board game Kickstarter. Sony must have been pleased with CMON's work before!

Bloodborne: The Board Game will come with multiple distinct Hunters (four in the base version, at least three more via Kickstarter-exclusive rewards and stretch goals) and four campaigns that are meant to be played across several 60-to-90-minute sessions. Thanks to a series of now-achieved stretch goals, the board game will also come with additional rules and tiles for playing through Chalice Dungeons. Just like in the video game, these Chalice Dungeons provide randomized, relatively brief challenges for one-and-done play sessions with folks who may not want to commit to a campaign and who may or may not be horrified by the grisly detail/size of the cleric beast "miniature."

If your interest is piqued, you can take a look through an early version of the rules right now to get a feel for how the game plays. Be aware that pledging for a copy of the game will cost you a cool $100, which is enough to buy about five copies of Bloodborne on PS4. But Bloodborne on PS4 doesn't come with dozens of minis and a chance to watch your friends get slaughtered by angry mobs around the comfort of your kitchen table, so it balances out.

You can find even more to play (no screens required) with our list of the best board games, or check out what's new in games and entertainment this week with our latest Release Radar.