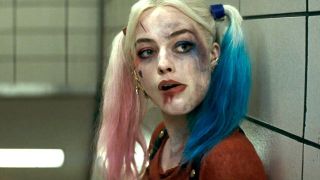 Margot Robbie, who plays Harley Quinn in both Suicide Squad and the upcoming Birds of Prey, has spoken to sister publication Total Film magazine of the differences between the two productions, describing the "awesome" atmosphere on the set of next year's DC anti-villain team-up.

Suicide Squad director David Ayer recently lamented the reaction to Suicide Squad as “being hammered for something that was not my original vision." For Robbie, that didn't bleed through into the work on set, "During production, we had an amazing time,” she says. “That set was super... I was going to say ‘harmonious’. It was more than that. The squad really united and bonded in a way that I don’t think anyone was even really expecting. And that was largely due to this intense rehearsal month we had beforehand. It was part of David’s process."

Was it the same for Birds of Prey? As Robbie explains: "No two movie sets are ever the same, and every director has a different process. But we bonded in a different way. I think that there was an immediate understanding between the women. We could all recognise that, ‘This is sick. We’re the chicks, and we get to do this shit. This is awesome.’"

That ready-made connection may be crucial to the movie's success, and it's one Robbie said was already present early on: "We didn’t really need to work at finding a bond, because we kind of all clicked to begin with. And we also did chemistry reads beforehand. So we all bounced off each other quickly and easily.”

Robbie, director Cathy Yan and the cast speak in detail about the movie with Total Film magazine for the latest issue’s cover feature. The new issue hits shelves on December 20. Birds of Prey opens in cinemas on February 7.