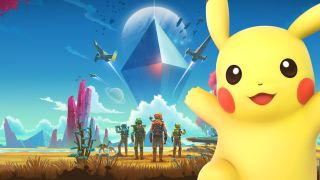 Thanks to contracts and publishing deals, it's harder than you'd think for your favorite game makers to team up, but this Big Question regular is a safe place. A place where dreams are allowed to live on, and Hideo Kojima is happily working on an Ape Escape game right now.

Hello Games and the Pokémon Company

Part of the joy of exploring the planets scattered across the various universes of No Man's Sky was discovering the weird and wonderful creatures. I started getting heavily into the mods available on PC, focusing on any that would heighten the variety, size and scale of the critters that would start emerging. And then it dawned on me. Imagine if these worlds were inhabited by familiar weird and wonderful creatures. If the Pokémon Company allowed No Man's Sky to take all 800-odd Pokémon and put them into a world where you really could travel to every single destination you've explored in the Pokémon series, from Kanto to Galar. But instead of continents of sorts, each locale appeared as a planet you could travel too. You could start creating mad crossbreeds, powered by Hello Games' tech, utilising the Pokémon's various powers to make mega hybrids, but with the scale and power you'd expect them to have if they were real creatures. God damn I want this game to exist so badly. Sam Loveridge

Rocksteady is kind of cursed by the success of the Batman Arkham series, which is a shame because while they've mastered its rhythmic baddie smacking detective work, the studio clearly has other skills. The imagination used with the Scarecrow missions - or whatever way they manage to lever 'the hallucination level' into each installment - shows a flair for the eerie and macabre, as well as a great way to manipulate the player, that would be perfect for Silent Hill. Moments where Batman discovers his dead parents' bodies in the morgue before you knew anything was wrong, for example. Or what about the moment where you're told to 'Use the middle stick to dodge the Joker's gun fire' after failing a mission, leaving you confused as you shout at the screen because the game never told you before... wait , what stick?

Time and time again Rocksteady has demonstrated it knows how to make players feel uncomfortable, and seems drawn to doing it (the ending of Batman: Arkham VR is a great example, but also spoilers) Now imagine that sense of unpredictable, fourth wall-breaking creepiness applied to Konami's Silent Hills series and what the studio could do with it. Leon Hurley

Cadence of Hyrule: Crypt of the Necrodancer is exciting not only because it's a brilliant action-rhythm game, but because it opened the door to Nintendo letting indie studios play with its IP. And just as Zelda's rich musical landscape was a perfect fit for Crypt of the Necrodancer, the world and legacy of Super Metroid is perfect for Team Cherry, the makers of Hollow Knight. As far as I'm concerned, Hollow Knight is the best Metroidvania game ever made, surpassing both of the games that helped create the Metroidvania genre in the first place. I'm looking forward to Metroid Prime 4 as much as the next Switch owner, but I would kill for a 2D Super Metroid successor made by Team Cherry. The folks there really know how to make a compelling, flavorful, beautiful world and fill it with interesting characters and fun bosses. I don't want anything to get in the way of Hollow Knight: Silksong, but after that's out, please god give me a Team Cherry x Nintendo collaboration. I just know they could create something wonderful. Austin Wood

Ignoring the fact that Netflix is more of a game publisher than a studio at present, the streaming service giant has expressed a growing appetite to lend its various properties to developers for authentic tie-in games to some of the biggest shows on the planet. With that mind, I can't think of a better fit for a House of Cards video game than one which utilises Monolith's famous Nemesis tech from its recent Middle-Earth adventures. Instead of playing as a Ranger taking down Sauron's empire, you'll be a customizable politician climbing your way up the greasy pole of the US political system, from intern to POTUS, cheating, scamming, and blackmailing everyone who poses a threat to your ambition along the way. Sure, the ins and outs of the gameplay itself would have to be knuckled down (I can't imagine the American people approving of your avatar beheading their political rivals in the same way as Talos decapitates his, for instance), but I'm already infatuated with the idea of exploiting character's weaknesses, establishing congressional factions, and making a name for myself among Monolith's cast of advanced AI politicians. Alex Avard

Sony keeps teasing a new Ape Escape game, so why not go all-out with a bananas team-up? With apologies to Death Stranding, it’s the Hideo Kojima PlayStation exclusive that everyone is secretly pining for: a proper Metal Gear Solid game, instead of the minigame we got in Ape Escape 3.

It’d be worth it for the reaction alone; Koj making a new Metal Gear Solid game only for it to be an Ape Escape tie-in would be the most Hideo Kojima thing imaginable. Just picture the simian-filled stealth sections and the jabs Kojima would send Konami’s way. Bliss. Plus, who doesn’t want Specter and Spike to have a 45-minute back-and-forth on the pros and cons of nuclear disarmament? It’s a PS5 launch title waiting to happen. Trust me. Bradley Russell

We’re lucky to have a Metroidvania-style Star Wars game coming our way in Star Wars Jedi: Fallen Order, but I’m still hankering for an honest-to-goodness RPG set in a galaxy far, far away. And who better to handle it than Bioware and DICE? The former have a proven track record of delicious space opera via Knights of the Old Republic, the subsequent MMO, and Mass Effect. Meanwhile, DICE have shown off their considerable FPS chops thanks to two Battlefront games since 2015. Oh, and a little series called Battlefield. You may have heard of it. Mix that shooter gameplay and vehicular combat with the choice-rich storytelling of Bioware and you’re onto a winner. Because who wouldn’t want to ride an AT-AT walker as a Wookie wielding a lightsaber? A crazy person, that’s who. Benjamin Abbott

There is nothing like a first-person game with a detailed world with rich lore to get your teeth into. Mix it with a universe that’s already overflowing with history and stories, and you’ll be onto a winner. With Dishonored and Prey being some of the best in immersion, place-making and storytelling, think what they could do when teamed with Relic’s Warhammer 40K world, expertise and execution. (I’m particularly talking about Relic's third-person shooter, Space Marine, here.) I thought Warhammer 40,000: Space Marine was dope, and even though I didn’t quite finish it, I was a bit bummed that there was never a sequel. So in my desired but very fictional, alternate fictional future, step forward Arkane Studios.

They’d take all the Warhammer 40K-ness and mix it with some quality immersion and storytelling, keep Mark Strong as the voice from Space Marine, and then furnish it with some further environmental quirks, a gripping narrative and general intrigue. Imagine what they could do with free reign on a whole 40K battleship or planet. Just give me a first-person, Warhammer 40K immersive sim, and I’d turn into a squealing little goblin. It’d be mad. Mad good. Rob Dwiar

I love the way games like Pokemon Go and Harry Potter: Wizards Unite encourage people to be active and experience their local communities in a new way. But the part where you actually play them is brain-achingly dull. How many things can I toss balls or trace magic runes at before I start shrieking? I'm not saying I'm above it all - busy work can still totally be my jam in the right context. That's where Ryu Ga Gotoku Studio, AKA the Yakuza and Judgment developers, come in. All I need is some melodramatic subplots about long-separated families or strangers with weird requests for crane-game prizes to get me running around Kamurocho for hours on end. Now, what if Kamurocho was the entire world? Walking around my block, picking up substories from NPCs camped out at local points of interest, beating up thugs in endless random encounters. Maybe if you're lucky you'll even find a Shiny Majima waiting to ambush you in your broom closet! Connor Sheridan