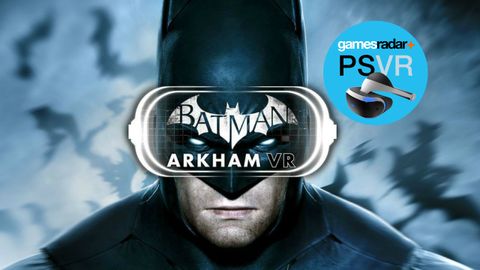 A brilliant slice of Bat action that lets you make the most of being the World’s Greatest Detective. Don the cowl. It’s worth every penny...

No one does Batman like Rocksteady. Since its surprise insta-masterpiece Arkham Asylum all the way back in 2009, the UK studio has tapped into exactly what it is that makes the Dark Knight such an enticing hero. From Kevin Conroy’s gravelly tones, to the madness of Mark Hamill’s Joker, to the hulking mass of Gotham’s imposing skyline, it’s hard to even imagine how other games will take on the world of the Caped Crusader now the team has moved on. A good thing, then, that the studio has left behind the ultimate love letter to its trilogy in the shape of a VR experience that starts with you literally picking up the cowl and looking in a mirror. The fact it only gets better from there is testament to just how good Arkham VR really is.

Descending into the Batcave in virtual reality has to be seen to be believed. After donning gauntlets and clipping each individual Bat-tool to your very own utility belt - yep, look down, there it is - with a satisfying buzz of the Move wand, you’re lowered into the ultimate in heroic wish fulfillment. No longer are we trapped, hovering over the Dark Knight’s shoulder watching his cape swish, enticingly close but never quite there. This is how it feels to be inside the Batsuit - easy, tiger - and whether it’s when Alfred approaches to greet you or when you look up and watch winged rodents circling the pillar of light entering the cave, you’ll feel like you’re finally home. If home is a dark, probably-quite-dank cave full of billionaire playboy gadgets, that is.

Arkham VR immediately plays to VRs strengths. Rather than any kind of recreation of the main games, this is a new story with a fresh viewpoint, and one that understands the limitations of a VR control set-up. This doesn’t mean you’re constantly static, and there’s a surprising amount of head tracking if you’re looking over parapets or into drawers, but a teleport-style system is in place for exploring Gotham’s grim environments. A vertical Move controller symbol highlights where you can travel and with one press of a button you’re there with no nausea-inducing lurch. Satisfyingly, this plays to the World’s Greatest Detective aspects of the Bat nicely, making the most of his forensic scanner to examine the world. In one especially clever - and somewhat unnerving - sequence, you explore a morgue, checking bodies for bomb fragments. If you thought those crime scenes were gruesome in Arkham Knight, examining cadavers up close in VR has a certain je ne sais qui-aaaah.

The story itself takes around an hour to complete if you don’t get too distracted just looking at the world. Rocksteady knows you just want to experience its Gotham in 360 degrees. One scene that takes place at the top of one of the city’s skyscrapers indulgently lets you take in the vertigo-inducing view from multiple pillars, waiting silently for the Penguin to finish a phone call as Gotham’s nightlife lights up around you. Yep, there’s a stack of Arkham’s finest in here. It might be short, but it’s a perfect slice of Batman fiction, taking you on a mini highlights tour of locations and letting you come face-to-face with certain fan favourites. Plus, it turns out that Batman’s world is infinitely scarier when you’re inside the cowl. I’ve got even more respect for Mr ‘Does it come in black?’ than ever before. This is an intimidating universe to look in the eye.

It’s completely understandable that there’s no brawling or Batmobile action, but hearing the roar of your favourite vehicle between scenes is a tantalising tease of what a full Batman VR game could be. Cleverly adding a sense of movement without any actual flight, you use the grapnel gun to fire yourself from scene to scene and from each area in the Batcave. It’s just like the Move teleporting but the added sense of bringing a gun from your belt and firing it layers in an extra sense of depth. I did this by firing my grapnel, it doesn’t matter that I’m not whizzing through the air. The implementation of Move controls is also quietly, understatedly brilliant. The fact that you can just look down, see the gadgets and take one from your (height adjustable!) belt is incredible. One particularly nasty crime scene requires you to rewind the action using your forensic scanner. Rotating the controller slowly speeds through the action and the result is masterfully immersive. Add in a story conclusion that I won’t spoil, but makes the most of just how terrifying VR can be, and this isn’t just a brilliant experience but a glimpse at just how the long term future of gaming could feel if the industry gets VR right.

Fret not, it’s not all over after 60 minutes - even if this is why I couldn't mark the score any higher. Once the story is complete, the Riddler steps in, scattering his fiendish challenges across all of the levels like some kind of evil question-mark-covered Easter bunny. Plus, there’s plenty just to play with too. The Batcave is split into sections. Never has a case files section been so much fun, as each character appears in front of you full size to examine. Slotting hard drives into a reader will give you their combat stances and standing close enough to touch these characters is a perfect chance to take in the texture of Batman’s cowl or the hideous makeup of a certain Mr J.

Another section of the cave lets you wield the weaponry from previous games, encouraging you to swing around Harley Quinn’s baseball bat with a satisfying whoosh. Just playing in this world’s sandbox is enough. Whether you’re feeling like a Batarang master as you throw them at targets in the firing range section - yes, of course there’s scores to beat - or appreciating tuning into the GCPD’s police scanner under the giant dinosaur of the Batcave, you’ll be happy to just spend hours in this universe you’ve watched at a distance for so long. Everything is here to be touched and pressed. There are phones to be lifted to ears, blood to test, drawers to open, puzzles to rebuild in physical space in mid air. It might be Batman’s world but this lets you live in it, and you’re never going to want to take that headset off. Welcome to the Knight.

A brilliant slice of Bat action that lets you make the most of being the World’s Greatest Detective. Don the cowl. It’s worth every penny...