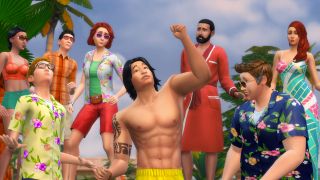 It's somehow been 20 years since the original Sims launched, which feels like a perfect time to reflect on all the atrocities we've committed over the course of two decades. So here it comes, the worst things the GamesRadar team has done, or have had happen, to their Sims...

The Price of Fame

I'm still processing the horrific - and fairly stupid - death of my most recent sim, the fashion influencer Lettuce Borealis. It still hurts, because in testing out the new Sims: Tiny Living add-on, I skipped the usual money cheats (what use are riches when there's so space for stuff?) and had got Lettuce famous through sheer hard graft and an unhealthy amount of Simstagramming. Yes, she was the worst, turning up at social events and stealing the limelight by randomly singing, as desperate for attention as a Kardashian a Met Gala, but she was mine. Her cruel and awful death came at a winter charity benefit she was throwing at a swanky venue, the paparazzi were there, fans, stars, and she was schmoozing her way through the crowd in stunning formal wear. Then the first tragedy struck, a fan froze to death on the porch, and a crowd gathered to stare in horror. Lettuce was one of the crowd, and the combination of shock and excitement meant I couldn't get her to move inside or change from her formal outfit into a coat. She froze, blue and stiff, and died in front of her friends, fans and the snapping of cameras. At least it's what she would have wanted. Rachel Weber

Okay, so this technically happened to my Sim in the sense that I, a malevolent 12-year-old god, made it happen. You see, I was a sheltered child, with limited internet access and a severely limited friend group. The Sims was my place to test the limits of a fictional society, to eke out my idea of right and wrong, to establish a moral compass under the draconian rule of two police offer parents. So I did the occasional Sims murder. I turned out perfectly fine, my therapist can assure you, but back then I would get increasingly frustrated with my Sims, who were much more difficult to manage than they are in the Sims 4. After a particularly annoying day where the Sims version of my elementary school sweetheart burned down the back end of the house while BBQing, I decided I had enough with his frivolity (plus he was cheating on my Sim with my best friend Sim). I built a small structure separate from the main house, lined it with fireplaces and filled the floor space with wood furniture. I instructed him to light all the fireplaces and have a seat in one of the wooden chairs and then I...deleted the door. Cheaters never prosper, okay? I will provide a doctor's note to ensure that this did not emotionally scar me upon request.

The Mystery of the Missing Swimming Pool

Look, I'm not sure what happened to my Sims. All I know is they were on the diving board one minute and the next they were dead. There were rumours. There always are. Someone may have paused the game and replaced the swimming pool mid-dive. In its place? A glass coffee table. Said person may have also cackled as water was rapidly replaced by shards of broken glass. Who’s to say? Not me, the Coffee Table Killer.

In the world of the Sims 3, meteor strikes are apparently very rare, so you can imagine my surprise when one crash-landed directly on my Sim as he was having a romantic stargazing session outside of the house. Everything was going so well. The stars were shining overhead, his mood was in the green, and romance was in the air. Then, without much warning at all, an action icon appeared saying "react to meteor". The sheer panic of reading that has I rested my cursor over it has never left me. Before I had time to move my sim out of harm's way, the meteor of death crashed on top of my sim and his paramour and sent them both to a fiery grave. Worst. Date. Ever.

I’ve never been a Sims fan but was deeply into Sim City on the Super Nintendo - where the worst thing that happened to the citizens of Wilsonia was the sudden, unexpected rise of an eight-year-old demi-god. Yes, while my younger brother was a Super Tennis shambles and flat-out refused to play me at Mario Kart, it turned out that he was very good at picking up an unmanned controller during an extended khazi break and immediately unleashing a wave of atrocities on my poor, unguarded populace. A plane crash, tornado and then the dreaded Bowser attack: in just six minutes, kid sibling tore my masterpiece to shreds, and left its residents in ruin. It took days to fix my dear city. And weeks – nay, months – to repair our relationship.

The Reality of Existence is Pain

It's easy to play god, isn't it? Spawn a digital being, name it, show it a world that you sort of wish was your own, and then steer them through their famiscile of a life. They might get the dream job, find the perfect person, or just enjoy a life of unfettered decadence if you whack on the unlimited money cheat. Except all that ignores the fact that existence is pain. Life is never easy, no matter how many cheats you turn on, how perfectly you engineer their days on the virtual street they call home. By playing god, you create something that has hope, dreams, and the desire to live. And at some point, they will hurt. Their needs will be too hard to meet. And eventually, they will die. If you hadn't turned on the game, they would never have known that pain. You monster.

I've never been sadistic to my Sims on purpose, after all why would I want to damage the Sims I've spend literal hours crafting to look exactly like people I know. Totally normal right? My friend growing up on the other hand took great pleasure creating Sims families, forcing them to have baby after baby until they had the perfect family. The only issue was that if she thought any of the children were too ugly, she'd make them disappear. Mostly by burning them.

The only time I've ever played The Sims was at a friend's house after school one day, whereby he decided to show me a wealth of mods he'd downloaded for The Sims 2. My memory gets a bit hazy here, but one of the mods allowed us to create "ugly babies" with adult faces (think baby Yoda with the face of actual Yoda), and so - naturally - we produced a baker's dozen worth of the little guys and let them roam free in a small house with no responsible adults to be seen. That's it. That was the joke. We just laughed at the sight of a group of adult-faced babies crawling around an empty residence for about an hour, and then it was back to World of Warcraft.

I've only ever done the basics in The Sims: a house made only of swimming pools, for example. Where everyone swam from wall to wall, increasingly panicking as their exhaustion increased. Then there was a kitchen with nothing but ovens in a house with no doors. The fire started almost immediately and, with no way to reach each other, the family inside got emotional fast. The worst crime wasn’t mine, though, it was a writer I worked with who, as part of their review, put a naked sim in a one square room and left him there to ‘see how long he took to die’. The whole office got involved, checking in as he screamed and flailed in his own filth for most of the day - gradually losing his mind until death turned up to release him. I forget what the score was in the end.

Back in the Sims 3 days I created a single, female sim and moved her into my town. She happened to come from a lot of money (*ahem* Motherlode) so she had a lot of free time on her hands. I decided to make her the resident female lothario, and romanced anyone and everyone who came knocking on her door. The mailman, the husband and wife who came to welcome her on moving day, the maid she didn't need, the bloke who kept jogging past her house. It didn't take long before she had woo-hooed her way through most of the residents. Those of you who remember Sims 3, however, might remember that it was open world, which meant that on one occasion when my female casanova (why are all terms for someone who romances a lot of people focused on men, by the way??) was kissing her married lover goodbye, her husband walked past, closely followed by the resident jogger and a few other local lovers. It led to a chain reaction of slaps and rapidly depleting relationship bars.

The real issue, though, was that because she was now hated by so many people, they were all out for revenge. Every day that followed, she would wake up to a flaming poo bag on her doorstep, her bin tipped over, and she never managed to get to her newspaper before someone had pinched it. These faecal assaults came from everyone but the maid, who she remained involved with and then went on to marry in a very, very private ceremony in the back garden.

The worst thing that's ever happened to my Sims?