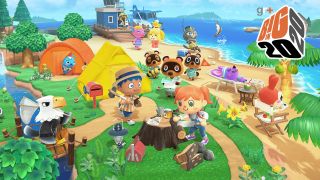 The aptly-titled Animal Crossing: New Horizons is sure to be heartwarming, relaxing, and gentle, just like its predecessors. But it's also set to innovate with smart design updates both minor and foundational, literally and figuratively vaulting its villagers into uncharted territory.

Remember having to spend 30 tedious seconds walking along a river to find a bridge? No longer, as New Horizons lets you leap over water with a vaulting pole like a graceful chibi gymnast. Missed out on a piece of furniture at Tom Nook's shop? Just gather the materials and craft it yourself, then plop it down in your house or into any empty spot on the island. The first Animal Crossing for home console in over a decade is the most meaningful update to the series yet, and we here at GamesRadar+ can't wait to set up camp.

Fans of the lovable life-sim franchise are well familiar with the old setup: catch a train to a new place, build up your house, meet neighbors, and soak in the merriment. And as much as I'd gleefully commit hundreds of hours to another Animal Crossing game with that same premise, I'm excited to see how New Horizons refreshes the formula. This time around, you and a group of adorable villagers are sold a getaway package and sent to a deserted island where you'll help build a small society.

Along with everything you loved doing in earlier Animal Crossing games, you'll use resources like wood, clay, weeds, and trash to craft a variety of items and tools, which you can use to build up and decorate the island as you please. You'll find crafting recipes in the all-new NookPhone, which can also be used to facilitate a co-op session, take pictures, and track Nook Miles earned through completing various activities. You can also pave roads to different destinations to make your new island paradise feel more and more like your forever home.

As you might've gleaned from the title, Nintendo is billing Animal Crossing: New Horizons as a fresh experience with new ideas. Unbound by the laws of a governed society, you're free to build and position signs, benches, pathways, decorations, and gardens across the deserted island. This is Animal Crossing at its most expressive, giving you a big blank canvas and the largest selection of tools and accessories yet to color your fantasy. As for me? I dream of collapsing into a hammock on the beach by the fire after a long day of fishing; full-bellied and utterly absent from the real world.

Animal Crossing on the GameCube changed what I thought video games were about, or at least what they could be about. Until the time I took out my first mortgage from Tom Nook, games were challenges. I'd consult strategy guides to overcome whatever obstacle stood before me, I'd practice against bots to beat my friends, and I'd hack through thousands of monsters to level up. With Animal Crossing, I did only what I wanted. I had goals, like getting a bigger house and catching a coelacanth, but for the first time I was deciding for myself what those goals were. The game itself was simply an impartial playground.

Animal Crossing's apathy toward how I chose to enjoy its features was enchanting. It had secrets, but it was up to my own curiosity to discover them. And man, was I eager to see everything that charming little town had to offer. I remember making the regrettable choice to sneak into my brother's room late at night to catch K.K. Slider playing a new song, only to wake my sleeping brother with the GameCube startup sound and be sent back to my sad, GameCube-less room.

I also remember discovering the limitations of Animal Crossing. I wanted to hang out with real-life friends online, have a house by the beach, and make things. Whatever Animal Crossing was, I wanted more of it - a new horizon, you might say. The series would continue to evolve with each new entry, culminating in the most recent mainline title, the brilliant New Leaf on 3DS. But with the addition of a new and unique premise and locale, a crafting system, the convenient NookPhone, and a swath of new customization features and quality-of-life improvements, New Horizons looks to be the biggest evolution yet for the Animal Crossing series.

Of course, what remains at New Horizons' core is that same comforting embrace that's kept Animal Crossing in the conversation for almost two decades. What's different are the new tools we can use to accessorize that wonderfully-familiar experience. Players will recognize Animal Crossing in 2020 just as they did in 2001, even if its new horizons get people talking.