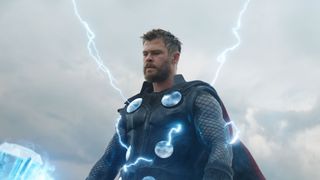 The pair have been notably open in the past about everything from Avengers: Endgame deleted scenes to why the Avengers: Endgame runtime just had to be three hours long. During their Endgame writers' SDCC 2019 panel, however, we got a whole bunch of new information, and our Total Film team were on the ground in Hall H to hear it all, including details of a particularly trippy Avengers: Infinity War scene that was ultimately scrapped, as well as the four-word advice Kevin Feige gave to the MCU writers.

Infinity War was set to have scene with Thanos judged by Living Tribunal via trip through the Doctor Strange-esque mindscapeJuly 19, 2019

One for fans of the comics, this. Avengers: Infinity War, according to Markus and McFeely was originally meant to have a scene involving the Mad Titan heading into a "mindscape" during his fight with Doctor Strange on Titan and being judged by the Living Tribunal.

For the unitiated, the Living Tribunal is judge, jury, and executioner of the Marvel universe, and is a cosmic power far greater than anything we've ever witnessed in the MCU. Yes, even Thanos. His presence, though, may have pushed things a little too far, too early in terms of greater powers lurking beyond the fringes of the universe. Expect The Eternals to rectify that in Marvel Phase 4, however.

You'd expect Kevin Feige, overseer of Marvel Studios, to be a harsh taskmaster. Not so. His advice to Markus and McFeely? "Stick the landing." They did that - and then some.

Professor Hulk was meant to appear in Infinity War before Endgame

The Jade Giant was effectively MIA during the events of Infinity War. Markus and McFeely, who also wrote that alongside Endgame, have revealed that instead of Mark Ruffalo's Bruce Banner being stuck inside the Hulkbuster during the Battle of Wakanda, he was meant to transform into the hybrid Professor Hulk that we saw, uhh, dabbing during Endgame.

Thor vs. a serpent? It was one of the ideas thrown around for Infinity War

The Avengers series has scrapped a lot of wicked-cool fights. Thor vs. Thor was left on the shelf, and the God of Thunder also could have fought a serpent (someone's been brushing up on their Norse mythology) in Infinity War, according to the writer duo. Why? It was all to do with Thor claiming Stormbreaker. Instead, we got scenes involving Groot and Peter Dinklage's character, Eitri.

The writers had *lots* of options for Infinity Stone locations

Don't believe me? Squint and check out that board above. The writers mapped out every location of the Infinity Stone, just so they were doubly thorough. Imagine an Endgame movie that involved a Helicarrier heist or in a HYDRA facility.

Why we didn't get to see Rocket collect the Reality Stone

In a weird misnomer, the Reality Stone is the only Infinity Stone we didn't see collected in Endgame. Of course, having Rocket extract the Aether from Natalie Portman would have been a little weird, but the writers also felt one last reunion between Thor and his mother, Frigga, helped put the God of Thunder back together.

Getting a peek behind the creative curtain is a rarity at the best of times, let alone with Marvel's state secret-level protection guarding all of its big secrets. Markus and McFeely, though, were happy to divulge some of the process behind the third-act scrap involving Thanos and all of Earth's Mightiest Heroes. Some story beats here are illegible, though some are clear as day, including the Gauntlet hot potato and, yep, Tony Stark's death. It's still raw, damn it.

Markus and McFeely clearly tossed around some wild ideas in the writers' room. The most bold of which involves Captain America being beheaded. Thanos travels back in time to 2014 and emerges in 2023 with Steve Rogers' decapitated head in tow. The kicker? He shows it off to 2023 Cap. No, I'm not sure how that works either.