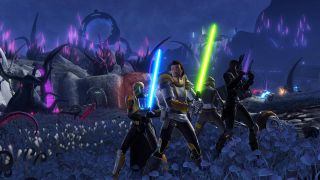 Games that defined the Decade: Mass Effect 2 had strength in storytelling by not being afraid to kill off its heroes

Everyone knows that two doctors, ‎Ray Muzyka‎ and ‎Greg Zeschuk‎, built BioWare as a business. But the culture and characters that made the studio a success were conceived at James Ohlen's table.

Ohlen was the Dungeon Master of the pen-and-paper campaign that gave birth to Baldur's Gate. Rather than play with the kind of optimised uber-heroes who tend to star in computer RPGs, the group rolled deeply flawed characters and stuck with them. Khalid was a fighter with an underwhelming strength stat, which contributed to a personality defined by low self-esteem. Minsc was a barbarian who had a habit of keeling over during combat, and so his player, Cameron Tofer, invented a hamster sidekick to run around the battlefield in Minsc's stead.

These unconventional party members shaped the breakthrough RPG that followed, lending Baldur's Gate an irreverence that balanced its doomy proclamations and political intrigue. They also taught players to embrace imperfection: if you picked the assertive healer and druid Jaheira, you had to take her husband Khalid too, and find a way to make him work – perhaps discovering his potential as the party's bulwark. You can still see that inclusivity in BioWare's DNA today.

Which is why it matters where James Ohlen goes. Earlier this month, he announced the founding of a new studio with an old BioWare Austin mucker, Chad Robertson. Archetype Entertainment is an "autonomous division" of D&D owners Wizards of the Coast, and will make story-driven RPGs with a focus on impactful choices.

"We are building games that represent the diversity of our audience," the studio says on its site. "We also believe that game studios should empower top developers and challenge them with ambitious projects that are shaped by a strong, clearly communicated creative vision."

It's a statement that recalls some of the limitations Ohlen faced at BioWare Austin, a studio he co-founded that has often gone underappreciated.

BioWare Austin was set up to make Star Wars: The Old Republic, an MMO that was justly criticised on release for too closely resembling World of Warcraft. When Ohlen left BioWare in the summer of 2018, he expressed regret that he hadn't steered the project further from its most obvious inspiration.

"I was the game director, which meant I had the most power," he told Game Informer. "But I often felt like I was the captain of the Titanic and I could just steer it a teeny tiny bit if I put all my efforts into it."

Nevertheless, The Old Republic contains some of BioWare's finest adventures. The studio committed to filling the game with multiple origin stories, and once they'd got the obligatory Jedi Knight and Sith Warrior campaigns out of the way, they dug deep into the roles that rarely get the spotlight: Smuggler, Bounty Hunter, Imperial Agent. The latter cast you as, essentially, a caretaker to the Sith – cleaning up after their impulsive, messy, and strategically ill-advised killing sprees. Doesn't that sound like a fascinating perspective for an RPG?

In the years since, BioWare Austin has perfected its craft in primarily single-player expansions like Knights of the Fallen Empire, which relished the moral complexity of a Jedi-Sith alliance. While the world gobbled up any rumour or soundbite about Knights of the Old Republic 3, the studio quietly built worthy successors to the name.

By 2014, it seemed as if BioWare Austin would finally get to create something for itself. And fittingly, that breakaway game would be heavily inspired by tabletop D&D. Shadow Realms was designed to be played by five players - four together in a party, and the fifth against them as a kind of malevolent DM. The Shadowlord would control creatures, set traps, and shift the environment to trip up heroes. Shadow Realms would have been the first BioWare game to have one foot explicitly in the real world, since its protagonists would be transported from Earth to a parallel fantasy world, Embra.

Unfortunately, 'seemed' and 'would have' are the key words – Shadow Realms was later cancelled in favour of extra hands on Dragon Age: Inquisition and Mass Effect: Andromeda, two games headed up by other studios at BioWare.

The development of Anthem followed the same pattern. Despite its years of experience with BioWare's only online game, Austin was relegated to second studio on the project. Creative direction was instead enjoyed by the team in Edmonton, BioWare's oldest office.

According to a report on the making of Anthem, some staff in Austin found their expertise dismissed, and were frustrated by the lack of clear direction from Edmonton. It may well be BioWare Austin who ultimately sculpts Anthem into something worth playing, since the studio took over live services after launch. But a confused game with a terrible reputation is hardly a fitting reward for all that patience.

Archetype Entertainment, then, represents a chance for former BioWare Austin staff to make something for themselves. Its first project is a science fiction RPG – but with Wizards of the Coast on board, it must only be a matter of time before Ohlen returns to his D&D table.

Hopefully we won't have to wait long to add Archetype's first project to our big list of upcoming games.