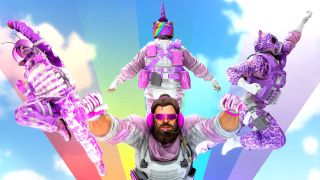 April Fools Day 2019 is here, and the video game jokes are just as clever, cheesy, and all around weird as you could hope. There are hot pink events for otherwise tacti-cool games, intentionally muddy textures or straight-up acid trip color schemes, and a surprising number of voice assistants, just to name a few.

We'll start by highlighting all of the pranks that you can actually play or otherwise experience for yourself right now, because overcommitting to a silly joke that will only be relevant for a few days at most should always be given special consideration.

Rainbow Six Siege has something for everypony

The Rainbow is Magic event for Rainbow Six Siege is full of pink and unicorns, and it even has a special new mission on a toy plane complete with teddy-bear suited hostages to rescue or restrain. And yes, you can totally unlock all of that pastel gear to use forever.

An official Garrus Vakarian body pillow cover can soon be yours (you'll have to provide your own pillow to fill it). BioWare opted not to go with the full booty pose because science has still not determined what Turian butts look like.

Capcom honors its arcade roots with this bizarre shoot-em-up you can play in your browser. You control the President of the World and belch endless fireballs at Balrog from Street Fighter.

Rabbids are invading For Honor for one day only! Think this is an April Fool's prank? Go in-game to find out! 😉https://t.co/JXxOkn9q1b pic.twitter.com/XLojxN0loaApril 1, 2019

Think Rabbids are played out? Why not log back into For Honor and start slaying them by the dozen? For one day only Ubisoft has swapped out all the minion units for every faction with its screaming rabbity things.

Yooka-Laylee gets even more retro-inspired with this new 64-Bit tonic update. Hit up Vendi, grab the tonic, and explore a world of simplified textures, a low-locked framerate, and even a glowy CRT filter for your screen.

League of Legends goes to the dogs

I haven't played League in years so I was really confused when I opened up this trailer, but it's legit. Several characters received new puppy-themed skins, including Fizz, who is literally a puppy now.

World of Tanks has changed a whole lot since 2011, but you're free to go back to the old days of tanks free-hanging off of ledges and leaving utterly immovable wrecks for the next few days in this special classic-mode event.

War Thunder gives you the keys to a flying saucer

Flying saucers beat jets any day of the week.

Watch these pranks now, realize you actually want them later

You can't play these for yourself (at least not right now) but pretending is fun too.

Everything's better with the announcer from NBA Jam shouting "boomshakalaka" in the background. That goes double for the antics of Rage 2. I think this one might actually be real, though we won't be able to play with it until Rage 2 comes out.

Is @ControlRemedy too dark and scary? We have made it much more accessible and friendly. Control will now ship with technicolor mode enabled on all versions. Thank you for your feedback!🌈 https://t.co/6H3BABABOK pic.twitter.com/Sr88loDHNgApril 1, 2019

Prepare for the Yakuza RPG

The problem with prank April Fools' announcements is there are always at least a couple I wish were real. This turn-based Yakuza RPG is one of them. And yes, I know Yakuza Online exists but it's not out in the US and it's not the same!

Final Fantasy gets a home assistant/assailant

This prank converts the sentient, unknowably powerful weapon that appears across multiple Final Fantasy games into your own Alexa-style voice assistant. Alexa would be cooler if she could float around your house. Less cool if she killed you though.

Nvidia Ron wins your internet arguments for you

Another voice assistant, but instead of overtly trying to ruin your life and ultimately end it, this one will win your comment section arguments for you.

World of Warcraft's patch notes have Tinder for dungeons

The joke's on you Funcom, I'd probably rather play this goofy top-down cartoon Conan game than Conan Exiles. That's not really Exiles' fault, I just hate online survival games.

Platinum Games gave its president and CEO Kenichi Sato a Vanquish-style robot suit complete with a thruster that comes out of his ass. The best part of the whole video is the slide that shows his 57th birthday like it's a release date.

The EDF 6 rap was inevitable

Listen, it's a bunch of EDF soldiers rapping in Japanese and dancing alongside giant mascots. It just works.

You asked for it, and here it is - Bardin's Songbook. Get yours now before they run out of stock: https://t.co/VCbLgQbo1b pic.twitter.com/4b0y2TrmORApril 1, 2019

One of the characters in Warhammer: Vermintide  and Vermintide 2 has a habit of bursting into song. It's more drinking ballads than wholesome musical, but the developers still put together a songbook for them (though I think it might have been "sold out" to begin with).

We are proud to announce our new, easy-to-use software that will change the way you manage all your games.Introducing the CORSAIR Game Launcher. #CORSAIRLauncher pic.twitter.com/HiZ5oNhZ7kMarch 31, 2019

With Epic Game Store starting to shake up Valve's near-monopoly on PC gaming launchers, Corsair Game Launcher Launcher has a solution for folks who just can't stand all those desktop icons.

Ready for more? These April Fools' pranks speak for themselves.

A new champion is about to enter the King of Iron Fist Tournament! By popular demand, #TEKKEN 7’s very own Director @Harada_TEKKEN will step into the ring for some epic showdowns. Can you guess who he will side with in the war to settle the Mishima feud? pic.twitter.com/gPPRqmsYvdApril 1, 2019

You thought we were done with announcements? Surprise, we've got one more! Presenting Sniper Elite: Love In Your Sights, a whirlwind wartime romance.Get your coat Karl, you've pulled...the trigger.Coming 20-never. pic.twitter.com/T9iXjK7ipoApril 1, 2019

Introducing a new DOOM experience for the artist in everyone. pic.twitter.com/rU2NvMkHI6April 1, 2019

Did you know we once made a fully playable #Worms for #Teletext? Find out all about this long lost technical marvel here: https://t.co/4Co6kr1qcR pic.twitter.com/pHPOCe7Ym1April 1, 2019

For more games that you can actually look forward to, check out our list of new games 2019. Or watch what's coming up in the week ahead with our latest Release Radar video