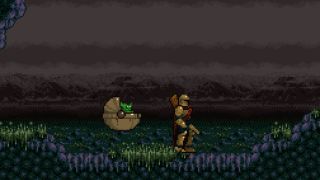 An artist and game designer imagined what it would look like if the worlds of Disney Plus' The Mandalorian and Metroid collided, and the result is pretty dang cool.

Tiani Pixel shared two different pieces of pixel art on Twitter and it's got me wishing this game existed. The designs are done in the style of 1994's Super Metroid, and the attention to detail is astonishing. The first piece of artwork shows our boy Din Djarin standing in wait while the absolutely adorable Baby Yoda bobs behind him. Look at his little head turn! Look at those big ears! The soulful eyes!

Here's both as image so you can look at it for as long as you want: pic.twitter.com/boHgcWoex9January 27, 2020

The second piece of pixel art imagines The Mandalorian's own Samus Screen that shows off his status and abilities. Whereas Samus' Beam has five firing options (Charge, Ice, Wave, Spazer, and Plasma), The Mandalorian has an impressive array of weapons, including his Blaster, Amban Rifle, Whispering Birds, flames, and a grappling hook. Din Djarin's multi-use visor and Beskar armor is in the Samus Screen, as well.

Honestly, The Mandalorian is a perfect fit a Metroidvania game - Din Djarin could explore multiple interconnected worlds on his quest to keep The Child away from  Moff Gideon, defeating a variety of enemies along the way, as we grow even more invested in his story. Baby Yoda could bob along behind him the entire time, staying far away from the action (for my anxiety's sake).

Alas, a Mandalorian/Metroid mash-up will remain a dream, but a very pretty one at that. However, if you're interested in a game that vaguely resembles the TV show, there's always Star Wars: Bounty Hunter.

Here's everything we know about The Mandalorian season 2.