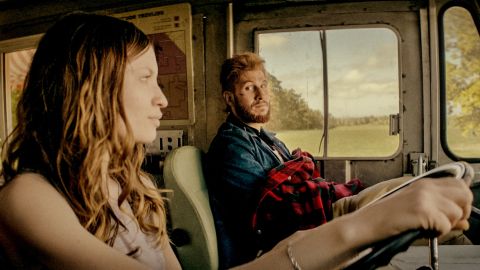 Mad Sweeney and Laura Moon continue to prove they're the most interesting thing about this show with a road trip back in time.

The penultimate episode of American Gods focuses on its two most interesting characters - Laura Moon and Mad Sweeney - as they continue their journey towards Shadow/Mr Wednesday/Laura’s resurrection. The episode is pure gold as their understated chemistry keeps your eyes locked to the screen and some interesting revelations are brought to the forefront. In fact, I’d say the only bad thing about A Prayer for Mad Sweeney is that it reminds you how much Shadow, the supposedly main character of the show, is boring as hell. I just want to watch these two bitch and fight on a road trip across the whole of America.

Unlike most of the episodes so far, episode 7 sees the Coming to America intro weave its way into the bulk of the story as Mr. Ibis tells the tale of Essie McGowan. Brought up on the tales of fairies and leprechauns as a child in Ireland, she never stopped believing in the power of the ‘little folk’ and spent her life leaving them gifts so they might bring her good luck. She had plenty of that in her life (as well as bad) but I won’t ruin the details of Essie’s truly fascinating life here - just go watch it - instead, let’s just talk about the important bits.

Important bit number one - Essie is played by Emily Browning (who also plays Laura Moon in the show). Wearing a rather ridiculous red wig but with an impressive Irish accent, Browning takes up the mantle of another fierce female with ease. The question is, what’s the significance of her playing both roles? The answer may lie in Mad Sweeney who also had a part to play in Essie’s life. Having met Essie before, albeit a few hundred years ago, you have to wonder why he doesn’t recognise Laura Moon when he first meets her. The way the show is shot, we only see him come face-to-face with Essie once she’s fairly old, but we know he’s been around her whole life so he’s no doubt spied her younger self at some point. On the other hand, maybe people are reincarnated all the time and Sweeney doesn’t feel it’s important enough to mention to Laura?

Important bit number two - while we watch the tale of Essie McGowan play out before our eyes, there’s another interesting revelation about Mad Sweeney’s more recent past during the present-day timeline. Having released Salim-not-Salim from his duty to drive them around, Laura steals an ice cream truck and then has a terrible crash… again (seriously, she should stop getting into cars). Thrown through the window, the collision rips open her chest and that precious gold coin rolls away leaving her a motionless corpse on the road. Mad Sweeney makes a grab for the coin and starts to leave but something stops him. As he pauses on the road, we flash back to the other car crash, the one that supposedly original killed Laura, and we see her lying on the side of the road, seriously injured but alive. And who should appear but everyone’s favourite leprechaun…

Watching her struggle to breathe, Mad Sweeney tells one of Mr Wednesday’s crows to tell him it’s done and the implication is clear - Wednesday sent Sweeney to kill Laura. This ties in with what we saw in a previous episode, when Wednesday sped away from the motel with Shadow despite seeing Laura in his car mirror. Clearly he doesn’t want the pair to be together - the question is why? Undoubtedly Shadow wouldn’t have taken Mr Wednesday up on his offer if his wife had still been alive and waiting for him back home, but I can’t see Shadow’s services being so important as to justify killing Laura. So far, all he’s done is follow Wednesday around being confused and/or angry. Clearly there’s more to his character than we know, but with only one episode left to go, the showrunners are running out of time to tell us.

This is one of the most well balanced and interesting episodes of the season and it adds real depth to the character of Mad Sweeney as we find out more about his past and where he came from. Pablo Schreiber is on excellent form as ever, and it’s a joy to watch his previously brazen character show real pain as he recounts his past indiscretions. There’s a vulnerability here that we haven’t seen before and it starts to make you question what Wednesday has done to him… or forced him to do for him. Laura is the perfect ying to his yang yet again and although the main plot of the show isn’t pushed forward by much, you feel like you’ve gained a wealth of knowledge by the time the credits roll.

My only concern is that with the season finale fast approaching, we’ve so much yet to to explore. We didn’t get any update on Shadow and Wednesday in this episode, it’s be shamefully long since we’ve seen Yetide Badaki’s Bilquis, and there’s some gods to come which haven't even put in an appearance yet (Kristin Chenoweth’s Easter). Not to mention the fact that Laura and Mad Sweeney haven’t even made it to where they’re going yet, and once they do, there’s going to have to be some serious explanations all round. Sadly, I think we’re in for a unsatisfying final episode, but that doesn’t detract from this magical tale about the truth of Mad Sweeney.

Mad Sweeney and Laura Moon continue to prove they're the most interesting thing about this show with a road trip back in time.