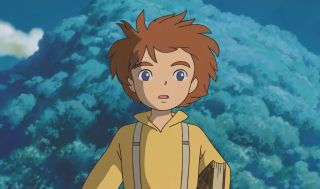 Fans of the Ni No Kuni rejoice as a third game in the role playing adventure series is currently in development.

Japanese business magazine Nikkei published an interview with Level-5 President Akihiro Hino where he talked about the Ni No Kuni movie, a Ni No Kuni mobile app, a new Ni No Kuni game and much more. The Ni No Kuni movie releases in Japan on August 29, Hino confirmed that the next game in the franchise would be released sometime after the movie, but didn't get specific about when.

It's not a lot of new information, but it is a confirmation that a new game is in development. We didn't hear anything about it at E3 this year.

The news comes after Bandai Namco announced that a remastered version of Ni no Kuni: Wrath of the White Witch for Nintendo Switch, PS4, and PC would come in September. Bandai Namco had a lot of big reveals at this years trade show, including the new collaboration from FromSoftware and George R.R. Martin, Elden Ring.

I played the remastered version of the first Ni no Kuni on PS4 at E3 this year and it holds up wonderfully. It's visuals and gameplay still felt amazing fresh, making me wonder if it needed a remaster at all. There's no harm in helping more people play a charming RPG.

Can't wait until the remaster launches for Switch in September? Check out the best 25 games on Nintendo Switch to find something else to play in the meantime.